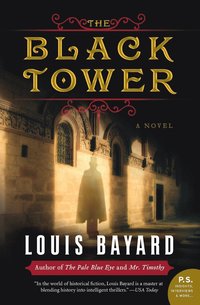 av Louis Bayard
Häftad Engelska, 2009-11-01
159
Köp
Spara som favorit
Skickas inom 10-15 vardagar.
Gratis frakt inom Sverige över 159 kr för privatpersoner.
Finns även som
Visa alla 1 format & utgåvor
Welcome to Paris, c. 1818. After the execution of Marie Antoinette and King Louis XVI, and the death of their son, the Dauphin, the Bourbon monarchy has at last been restored. But a remnant core of Republicans is still working to fulfill the promise of the Revolution, and the great Napoleon is plotting his next return to power from the rocky exile of St. Helena. Partisans on every side will do whatever it takes to advance their causes. Dr. Hector Carpentier is a partisan of no cause. His father, Dr. Julien Carpentier, saw first-hand the ravages of the Revolution and remained resolutely impartial to politics. His son, cowed by his domineering mother and missing his deceased father, leads a very quiet life. Until he meets Vidocq, Paris' most legendary police officer. As founder and chief of the newly created plain-clothes force called the Surete, Vidocq has used his mastery of disguise and surveillance and his extensive knowledge of the Parisian underworld to capture some of France's most notorious and elusive criminals. And now he needs the help of the shy, provincial Hector Carpentier. Between the two of them, they may prove that the Dauphin, like Anastasia, lives, which could change the course of history.
Visa hela texten

"Bayard is a fearlessly confident writer. We are treated to all of the narrative verve and sly wit-both plot twists and turns of phrase-that make his books such a pleasure to read." -- Washington Post "Delicious. [Bayard] inbues(s) his characters with real soul. You may find yourself, more than two centuries after the fact, aching over the fate of the pitiful young Dauphin. A-" -- Entertainment Weekly "Louis Bayard repairs to Paris for another daring historical adventure. Bayard makes brilliant application of Vidocq in the fanciful adventure. No snatch-and-run researcher, Bayard takes care to capture Vidocq's roguish voice and grandiose affectations." -- New York Times Book Review "In the world of historical fiction, Louis Bayard is a master at blending history into intelligent thrillers." -- USA Today "Louis Bayard finds fictional inspiration in historical fact. He has emerged as a writer of historical thrillers in the vein of Caleb Carr, author of The Alienist, and 19th century writers such as Alexandre Dumas, author of The Count of Monte Christo." -- Wall Street Journal "A tale that has as much energy and cunning as the detective propelling it forward." -- Christian Science Monitor "A compelling and sympathetic narrator instantly draws the reader into Bayard's stellar third historical. Bayard keeps the reader guessing until the end. Few writers today can match the author's skill in devising an intelligent thriller with heart." -- Publishers Weekly (starred review) "Having previously channeled Dickens and Poe, historical novelist Bayard throws down the gauntlet to Dumas in another high-energy melodrama. The novel's witty succession of trapdoor endings, culminating in "the quietest of abdications," keeps surprising us. Who says they don't write 'em like this anymore? Long may Bayard reign." -- Kirkus Reviews (starred) "In his fast-moving tale, Bayard deftly places details to make history come alive." -- Rocky Mountain News "Bayard doesn't revisit the past so much as reinvent it, historically and literarily, with a great deal of style, wit and suspense. Dark, surprising and Bayard's best example so far of a lean and accessible historical thriller." -- Miami Herald "In addition to the many fine, quirky character portraits and the visceral depiction of a chaotic France still reeling under the regime change, Bayard offers a rip-roaring plot full of smart and funny turns." -- Booklist (starred review) "The Black Tower breathes life into the world's first police detective, Vidocq, a literary feat that happily waited for this novelist. As the gripping and nuanced story races through the parlor rooms and back alleys of Paris, Bayard shows why he is at the forefront of literary historical fiction today." -- Matthew Pearl, author of The Dante Club and The Poe Shadow "A fascinating detective story about one of the world's most compelling mysteries. Bayard's scholarly and beautiful, heart-stopping prose always keeps before us the possibility of an improbability - what mystery is all about." -- Louisville Courier Journal "Top-notch historical fiction. Bayard's is the kind of popular fiction readers are thrilled to discover: equal parts effective plotting, lean but distinctive prose and characters and dialogue that brim with life from the outset. A royally entertaining read." -- Creative Loafing

A writer, book reviewer, and the author of Mr. Timothy and The Pale Blue Eye, Louis Bayard has written for the New York Times, Washington Post, and Salon.com, among other media outlets. He lives in Washington, D.C.