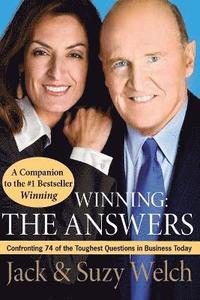 Confronting 74 of the Toughest Questions in Business Today

av Jack Welch, Suzy Welch
Häftad Engelska, 2011-03-20
179
Köp
Spara som favorit
Skickas inom 5-8 vardagar.
Fri frakt inom Sverige för privatpersoner.
Finns även som
Visa alla 1 format & utgåvor
In Winning, their 2005 international bestseller, Jack and Suzy Welch created a rare document, both a philosophical treatise on fundamental business practices and a gritty how-to manual, all of it delivered with Jack's trademark candor and can-do optimism. It seemed as if "no other management book," in the words of legendary investor Warren E. Buffett, would "ever be needed." Instead, Winning uncovered an insatiable thirst to talk about work. Since the book's publication, the Welches have received literally thousands of questions from college students and seasoned professionals alike, on subjects ranging from leadership and global competition to tough bosses and building teamwork. Indeed, questions about virtually every business and career challenge have poured in-some familiar, others surprising, many urgent and probing, and all of them powerfully real. Winning: The Answers takes on the most relevant of these questions, and in doing so, its candid, hard-hitting responses expand and extend the conversation Jack and Suzy Welch began with Winning. It is a dialogue that is sure to be both compelling and immensely useful to anyone and everyone engaged in the vital work of helping an organization grow and thrive.
Visa hela texten

Jack Welch is the Executive Chairman of the Jack Welch Management Institute, an online MBA school with more than 1,000 students. Prior to this, for 20 years, he was Chairman and CEO of General Electric Company, which was named the world's most valuable corporation and was consistently voted the most admired company in the world by Fortune magazine. Welch is active in private equity and consulting, working with dozens of businesses in a wide variety of industries. Along with speaking to upwards of a million people around the world, CNBC named Jack Welch one of the Top 10 "Rebels, Icons and Leaders" of the past 25 years.