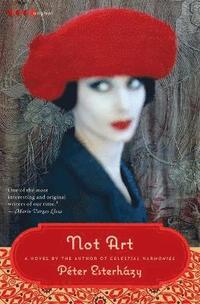 av Peter Esterhazy
Häftad Engelska, 2010-02-16
179
Köp
Spara som favorit
More than two decades have passed since Peter Esterhazy ended his book "Helping Verbs of the Heart" with the sentence, 'I will write about all that in more detail later'. In this luminous novel, he finally makes the meaning of this literary mystery clear. "Not Art" is the story of a mother whose defining communication with the world is in the language of football, a vocabulary that eclipses not only her son, but everything else. Football, in the author's next to the last book a stage and a medium for private historiography, now acts as a filter through which the world is seen, and is the root of his relationship to his mother and his mother tongue: a mother's language complex. Readers will discover 'family stories', subtly written and rounded, filled with irony, beauty, history, the Magnificent Magyars, father, grandmother, aunt, uncle, mother, life and death. There is emotion-platonic love, marital love, and a son's love for his parents. And there is the Esterhazyesque auto-reflexive textual world (Where does the author begin and end?). Old world glamour meets fractured post-war reality in a tale that touches on many aspects of life and philosophy relevant to us today - while centering on a son's relationship to his mother and the game of football that they love. The author received the following international awards: Vilenica Prize, Slovenia (1988, 1998) Ordre des Arts et des Lettres, France (1992, 1994, 2003) Prize of the Literary Festival in Rome, Italy (1993) Bjornson Prize, Norway (1995) Austrian State Prize, Austria (1999) Herder Prize, Austria (2002) Peace Prize of the German Book Trade at Frankfurt Book Fair (2004). He has also received nearly 20 awards in his native country.
Visa hela texten

"A fine addition to an international fiction collection." -- Booklist "Esterhazy's prose is jumpy, allusive, and slangy... There is vividness, an electric crackle. The sentences are active and concrete. Physical details leap from the murk of emotional ambivalence." -- John Updike, The New Yorker

Peter Esterhazy, a member of one of Europe's most prominent aristocratic families, was born in Budapest in 1950. His books, published mostly in Europe, are considered to be significant contributions to postwar literature.