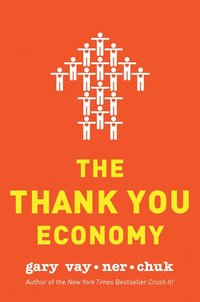 The Thank You Economy

av Gary Vaynerchuk
Inbunden Engelska, 2011-01-20
189
Köp
Spara som favorit
Skickas inom 3-6 vardagar.
Fri frakt inom Sverige för privatpersoner.
Finns även som
Visa alla 2 format & utgåvor
"The Thank You Economy" isn't some abstract concept or wacky business strategy. It's the way we buy and sell, the way we're interacting as consumers, as employees, as entrepreneurs on all levels, right now. The way our marketplace functions has been evolving right before our eyes. Top-down, one-way exchanges are gone, replaced by relationships based on open, honest, and constant communication between customers and business.

Today, individuals and brands that out-care and out-love their competition - those emphasising quality, value, responsiveness, and attention to detail, among other essentials - see the biggest returns. Gary Vaynerchuk contends that the people and companies harnessing the word-of-mouth power provided by multiplatform media - those that can shift their outlook and operations to be more customer-aware and fan-friendly - will pull away from the pack and profit in today's markets.

In "The Thank You Economy", he dissects the companies on the leading edge, showing how they are succeeding - and sometimes failing. Laying out the ideas and insight that support this enormous change, Vaynerchuk explores these emerging connections - from consumer to consumer and business to business and everything in between.

Passionate and persuasive, he reminds us that, surviving and thriving today it takes more than just hard work-it takes a heartfelt thanks to those who make it possible.
Visa hela texten

Bloggat om The Thank You Economy

Gary Vaynerchuk (VAYoNERoCHUK) is a 34-year-old self-trained wine and social media expert who has revolutionized the wine industry. His cult-like following is the result of his unconventional, often irreverent commentary on wine, combined with his business acumen and foresight to use social media tools like Twitter, Facebook, and YouTube to reach an untapped audience. He hosts a daily webcast called The Thunder Show on tv.winelibrary.com that attracts over 90,000 viewers each day. Recently, he became the official wine consultant on all Virgin America flights and his tastings will be featured on the airline's Red in-flight entertainment system. Askmen.com named Gary to its list of the 49 Most Influential Men of 2009 (immediately before George Clooney and Ryan Seacrest, and after Ashton Kutcher and Conan OO Brien), and he was included in Business WeekOs list of the top 20 people every entrepreneur should follow.