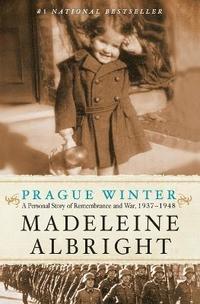 av Madeleine Albright
Häftad Engelska, 2013-03-05
137
Köp
Spara som favorit
Skickas inom 7-10 vardagar.
Fri frakt inom Sverige över 159 kr för privatpersoner.
Kan levereras innan jul!
Finns även som
Visa alla 2 format & utgåvor
By turns harrowing and inspiring, "Prague Winter" is Madeleine Albright's account of her early life from 1937 to 1948, a dozen years that witnessed the Nazi invasion of her native Prague, World War II, the Holocaust, the defeat of fascism, the rise of communism, and the onset of the Cold War. Her experiences, and those of her family, provide a unique lens through which to view this tumultuous period in modern history. Moving from the thousand-year-old Prague Castle to the bomb shelters of London, from the desolate prison ghetto of Terezin to the war councils of Churchill, Stalin, Roosevelt and Hitler, Albright reflects on her discovery of her family's Jewish heritage decades after the war, her Czech homeland's tangled history, and the stark moral choices faced by her parents, ordinary citizens, and the leaders of their generation. Drawing on her memory, written reflections, newly-released documents, interviews with contemporaries, and other primary sources, she tells the story of how millions of ordinary citizens were ripped from familiar surroundings and forced into new roles as exiled leaders and foot soldiers, resistance figures and collaborators, victims and killers. Albright points out that the response to these life and death issues was often shaped by concepts familiar even to a child like Madeleine had been at the time: fear, trust, adaptation, the search for identity, the pressure to conform, and the difference between right and wrong. As universal as it is deeply personal, Prague Winter offers a unique perspective on World War II, the relationship between generations, and the impact of time on our assessment of the truth. Emotionally compelling and often startling in its frankness, this volume is a guide to the future through the lessons of the past, as seen through the eyes of one of the world's most respected and fascinating figures.
Visa hela texten

"A gripping account of World War II... In taut prose, Albright weaves a powerful narrative that wraps her family's story into the larger political drama unfolding in Europe." -- The Philadelphia Inquirer "Albright has supplemented a deeply researched history of World War II-era Czechoslovakia with a moving family narrative." -- The Daily "Prague Winter is not only a family story-a proud and moving one-but a brilliant and multilayered account of how Czechoslovakia was formed along the most idealistic lines in the aftermath of World War I. An altogether fascinating and inspiring read." -- Michael Korda, The Daily Beast "Showing us villainy, heroism, and agonizing moral dilemmas, Albright's vivid storytelling and measured analysis bring this tragic era to life." -- Publishers Weekly (starred review) "A genuinely admirable book. Albright skillfully returns us to some of the darkest years of modern times. Spring eventually came to Prague, but in much of the world it is still winter. The love of democracy fills every one of these instructive and stirring pages." -- Leon Wieseltier "I was totally blown away by this book. It is a breathtaking combination of the historical and the personal. Albright confronts the brutal realities of the Holocaust and the conflicted moral choices it led to. An unforgettable tale of fascism and communism, courage and realism, families and heartache and love. -- Walter Isaacson "A remarkable story of adventure and passion, tragedy and courage set against the backdrop of occupied Czechoslovakia and World War II. Albright provides fresh insights into the events that shaped her career and challenges us to think deeply about the moral dilemmas that arise in our own lives." -- Vaclav Havel "A riveting tale of her family's experience in Europe during World War II [and] a well-wrought political history of the region, told with great authority... More than a memoir, this is a book of facts and action." -- The Los Angeles Times "A compelling personal exploration of [Albright's] family's Jewish roots as well as an excellent history of Czechoslovakia from 1937 to 1948... Highly informative and insightful... I can't recommend Prague Winter highly enough." -- The Washington Post Book World "In the crowded field of memoirs written by former secretaries of state, Madeleine Albright's books stand out... Albright is a charming and entertaining storyteller." -- The New York Review of Books "Albright's book is a sprightly historical narrative of this long decade... Her account of the destruction of inter-war Czechoslovakia, both as a geographical entity and as an idea of democracy, first by the Nazis and then by the Communists, is balanced and vivid." -- The Economist "A blend of history and memoir that reveals in rich, poignant and often heartbreaking detail a story that had been hidden from her by her own parents... The beating heart of the book is Albright's searing account of her intimate family saga." -- The Jewish Journal "An extraordinary book... Albright artfully presents a wrenching tale of horror and darkness, but also one in which decent and brave people again and again had their say." -- Istvan Deak, The New Republic

Madeleine Albright served as America's sixty-fourth Secretary of State from 1997 to 2001. Her distinguished career also includes positions on Capitol Hill, the National Security Council, and as U.S. Ambassador to the United Nations. She is a resident of Washington, D.C., and Virginia.