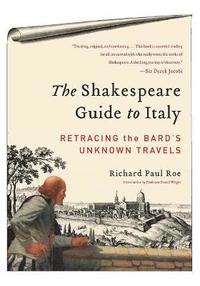 The Shakespeare Guide to Italy

av Richard Paul Roe
Häftad Engelska, 2011-12-05
159
Köp
Spara som favorit
Skickas inom 5-8 vardagar.
Fri frakt inom Sverige för privatpersoner.
Richard Paul Roe spent more than twenty years traveling the length and breadth of Italy to seek out and document the exact locations in which Shakespeare set his ten Italian Plays. Using as his compass only the exact lines spoken by characters in each play, Roe succeeded in pinpointing the location of nearly every scene in "Romeo and Juliet", "Two Gentlemen of Verona", "The Merchant of Venice", and others - and his captivating narrative of travel and scholarship reveals surprises about "A Midsummer Night's Dream", "The Tempest", and more, that will revolutionize the way we read Shakespeare. An introduction by the author's daughter, Hilary Roe Metternich, gives a behind-the-scenes look at her father's passion for the Bard and the lengths to which he went in pursuit of answers; and the copiously annotated, lavishly illustrated guide - including more than 150 maps, photographs, and paintings - makes for a richly compelling, deeply thought-provoking, and endlessly inspiring journey through Shakespeare's Italy.
Visa hela texten

"A fascinating look at a largely untouched aspect of Shakespeare's identity and influences. Recommended for Shakespeare enthusiasts and scholars as well as travelers looking for a new perspective, this is also particularly intriguing as a companion to specific plays." -- Library Journal (starred review) "An exceptionally entertaining, enlightening, and handsome companion for a thrillingly literate Italian sojourn." -- Booklist "Exciting, original, and convincing...This book is essential reading for all concerned with who really wrote the works of Shakespeare. A thrilling journey of discovery." -- Sir Derek Jacobi "This is a revolutionary and revelatory book, part thrilling detective story and part sober scholarly treatise." -- Michael York, Shakespearean actor of stage and screen and co-author of A Shakespearean Actor Prepares "This represents a hugely significant intervention in the study of Shakespeare and his dramatic works." -- Dr. William Leahy, Head of the School of Arts, Shakespeare Authorship Studies, Brunel University "Unless someone can prove him wrong, anyone who claims to have written the plays of Shakespeare needs to show some Italian travel documents." -- Mark Rylance, Founding Artistic Director, Shakespeare's Globe Theatre, London