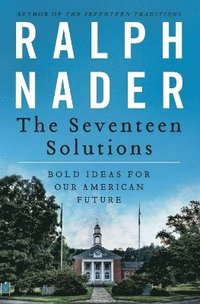 Bold Ideas for Our American Future

av Ralph Nader
Häftad Engelska, 2012-10-23
199
Köp
Spara som favorit
Skickas inom 5-8 vardagar.
Fri frakt inom Sverige för privatpersoner.
In 2007, Ralph Nader published "The Seventeen Traditions", a small-format, thoughtful survey of seventeen lessons in ethics and values he took away from his small-town Connecticut childhood. Now, five years later - in a much more desperate time - he returns to this bite-size, accessible format to offer seventeen ambitious but common-sense solutions to the nation's seemingly intractable economic and social problems. In "The Seventeen Solutions", Nader surveys the stark, concrete contrasts between the kind of society and economy America can and should have, and the way most people now have to live - and live without. In a hard-hitting introduction and seventeen tightly focused chapters, he chastises corporate America (of which the government is now essentially a subset) for the dispossession of the American people. His solutions include: Cracking Down on Corporate Crime; Getting Corporations Off Welfare; Requiring National Charters for Corporations; Fundamental Tax Reform; Reducing the Massive Military Budget; Innovative New Programs to Create Job Growth; Returning Control of the Public Forum to the People; Returning Control of Science and Academia to the People; Overthrowing the Hydrocarbon Empire; Ending the Commercialization of Childhood; Replacing Spectator Sports with Participatory Sports; Fostering Community Control of Health, Housing, Credit, and more; Rebooting Civic Education; Reforming the Criminal and Judicial Systems; Facilitating Large-Scale Recruitment into Civic Reform Groups; Promoting Organized Watchdog Groups Nationwide; Starting The Engine-Recruiting Wealthy; and Progressive Citizens to Make a Difference. In an age when the Occupy movement is raising consciousness about the inherent potential for excess and cruelty within the American economic system - yet still struggling to provide solutions - Ralph Nader's radical yet practical "Seventeen Solutions" offer fodder for debate, and important ideas designed to save the country before it's too late.
Visa hela texten

It will be very good for the country if Nader's revelations shock a new generation. This book is a subversive primer that should be read in every high school civics class. -- William Greider, The Nation

Ralph Nader was recently named by the Atlantic as one of the 100 most influential figures in American history, one of only four living people to be so honored. The son of immigrants from Lebanon, he has launched two major presidential campaigns and founded or organized more than one hundred civic organizations. His groups have made an impact on tax reform, atomic power regulation, the tobacco industry, clean air and water, food safety, access to health care, civil rights, congressional ethics, and much more.