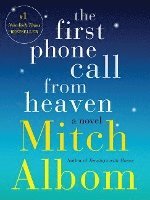 av Mitch Albom
Inbunden Engelska, 2013-11-12
249
Köp
Spara som favorit
Finns även som
Visa alla 6 format & utgåvor
The First Phone Call from Heaven tells the story of a small town on Lake Michigan that gets worldwide attention when its citizens start receiving phone calls from the afterlife. Is it the greatest miracle ever or a massive hoax? Sully Harding, a grief-stricken single father, is determined to find out. An allegory about the power of beliefand a page-turner that will touch your soulAlbom's masterful storytelling has never been so moving and unexpected.

Readers of The Five People You Meet in Heaven will recognize the warmth and emotion so redolent of Albom's writing, and those who haven't yet enjoyed the power of his storytelling, will thrill at the discovery of one of the best-loved writers of our time.

Book Description
"What if the end is not the end?"

From the beloved author of the #1 New York Times bestsellers Tuesdays with Morrie and The Five People You Meet in Heaven comes his most thrilling and magical novel yeta page-turning mystery and a meditation on the power of human connection.

One morning in the small town of Coldwater, Michigan, the phones start ringing. The voices say they are calling from heaven. Is it the greatest miracle ever? Or some cruel hoax? As news of these strange calls spreads, outsiders flock to Coldwater to be a part of it.

At the same time, a disgraced pilot named Sully Harding returns to Coldwater from prison to discover his hometown gripped by "miracle fever." Even his young son carries a toy phone, hoping to hear from his mother in heaven.

As the calls increase, and proof of an afterlife begins to surface, the townand the worldtransforms. Only Sully, convinced there is nothing beyond this sad life, digs into the phenomenon, determined to disprove it for his child and his own broken heart.

Moving seamlessly between the invention of the telephone in 1876 and a world obsessed with the next level of communication, Mitch Albom takes readers on a breathtaking ride of frenzied hope.

The First Phone Call from Heaven is Mitch Albom at his besta virtuosic story of love, history, and belief.

Albom has a nose for thin places: places where the boundary between secular and sacred is porous, and ultimate meaning is easier to encounter This brisk, page-turner of a story [is] another winner from Albom.
- Publishers Weekly
Visa hela texten