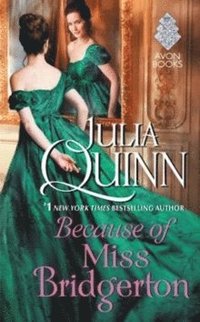 Because of Miss Bridgerton

av Julia Quinn
Häftad Engelska, 2016-03-21
119
Köp
Spara som favorit
Finns även som
Visa alla 2 format & utgåvor
Sometimes you find love in the most unexpected of places...This is not one of those times. Everyone expects Billie Bridgerton to marry one of the Rokesby brothers. The two families have been neighbors for centuries, and as a child the tomboyish Billie ran wild with Edward and Andrew. Either one would make a perfect husband...someday. Sometimes you fall in love with exactly the person you think you should...Or not. There is only one Rokesby Billie absolutely cannot tolerate, and that is George. He may be the eldest and heir to the earldom, but he's arrogant, annoying, and she's absolutely certain he detests her. Which is perfectly convenient, as she can't stand the sight of him, either. But sometimes fate has a wicked sense of humor...Because when Billie and George are quite literally thrown together, a whole new sort of sparks begins to fly. And when these lifelong adversaries finally kiss, they just might discover that the one person they can't abide is the one person they can't live without...
Visa hela texten

Julia Quinn started writing her first book one month after finishing college and has been tapping away at her keyboard ever since. The New York Times bestselling author of twenty-four novels for Avon Books, she is a graduate of Harvard and Radcliffe Colleges and is one of only fifteen authors ever to be inducted into the Romance Writers of America Hall of Fame. She lives in the Pacific Northwest with her family.