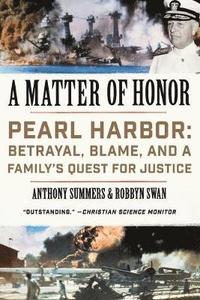 A Matter of Honor

Pearl Harbor: Betrayal, Blame, and a Family's Quest for Justice

av Anthony Summers, Robbyn Swan
Häftad Engelska, 2017-12-28
139
Köp
Spara som favorit
Skickas inom 5-8 vardagar.
Fri frakt inom Sverige för privatpersoner.
Finns även som
Visa alla 3 format & utgåvor
On the seventy-fifth anniversary, the authors of Pulitzer Prize finalist The Eleventh Day unravel the mysteries of Pearl Harbor to expose the scapegoating of the admiral who was in command the day 2,000 Americans died, report on the continuing struggle to restore his lost honor-and clear President Franklin D. Roosevelt of the charge that he knew the attack was coming. The Japanese onslaught on Pearl Harbor on December 7, 1941 devastated Americans and precipitated entry into World War II. In the aftermath, Admiral Husband Kimmel, Commander-in-Chief of the Pacific Fleet, was relieved of command, accused of negligence and dereliction of duty-publicly disgraced. But the Admiral defended his actions through eight investigations and for the rest of his long life. The evidence against him was less than solid. High military and political officials had failed to provide Kimmel and his Army counterpart with vital intelligence. Later, to hide the biggest U.S. intelligence secret of the day, they covered it up. Following the Admiral's death, his sons-both Navy veterans-fought on to clear his name. Now that they in turn are dead, Kimmel's grandsons continue the struggle. For them, 2016 is a pivotal year. With unprecedented access to documents, diaries and letters, and the family's cooperation, Summers' and Swan's search for the truth has taken them far beyond the Kimmel story-to explore claims of duplicity and betrayal in high places in Washington. A Matter of Honor is a provocative story of politics and war, of a man willing to sacrifice himself for his country only to be sacrificed himself. Revelatory and definitive, it is an invaluable contribution to our understanding of this pivotal event. The book includes forty black-and-white photos throughout the text.
Visa hela texten

"Meticulous, eloquent, and compelling - and hugely readable. The 75th anniversary of the Japanese attack is well served by A Matter of Honor." -- Simon Winchester, New York Times bestselling author of The Men Who United the States and Pacific "Anthony Summers' & Robbyn Swan's A Matter of Honor is a noble and right-minded portrait of Admiral Kimmel, the scapegoat for Pearl Harbor. The amount of fresh research is deeply impressive. Highly recommended!" -- Douglas Brinkley, author of Rightful Heritage: Franklin D. Roosevelt & the Land of America "The most comprehensive, accurate and thoroughly researched book of events leading up to the Japanese attack on Pearl Harbor ever written. It provides new information never before revealed." -- Admiral James Lyons, former Commander in Chief U.S. Pacific Fleet "Streamlined, muscular, objective, and well-written - a sensitive examination of a vast constellation of source material. [Summers and Swan] present a powerful argument in defense of Admiral Kimmel, who was blamed for the attack and forced into inglorious retirement. An excellent book." -- Martin Morgan, World War II historian and author "Meticulous research...thorough-going...provides a great deal of insight into the ordeal of Admiral Husband Kimmel, who served his nation well but was treated shabbily by its leaders." -- Paul Stillwell, author of Battleship Arizona "A fine book. Scrupulously researched and rigorously argued..[a] compellingly told story." -- David M. Kennedy, Pulitzer Prize-winning author of Freedom from Fear: The American People in Depression & War, 1929-1945

Bloggat om A Matter of Honor

Anthony Summers is the author of nine acclaimed nonfiction books. The Eleventh Day, on the 9/11 attacks, was a Finalist for the 2012 Pulitzer Prize for History and won the Golden Dagger - the Crime Writers' Association's top non-fiction award. He is the only author to have won the award twice. Educated at Oxford University, Summers traveled worldwide for the BBC, becoming a deputy editor of the flagship program "Panorama". His books on President Nixon, FBI Director J. Edgar Hoover, the Kennedy assassination, and Marilyn Monroe have been the basis for major television documentaries The feature film Scandal, starring John Hurt, was based on Summers' book on the Profumo sex/espionage scandal. A MATTER OF HONOR is Robbyn Swan's fifth book. With Summers, she was a Pulitzer Prize Finalist for The Eleventh Day, and won the Golden Dagger award. Swan has explored many of the seminal events of the past century - from the rise of the American Mafia, to the Kennedy assassination, to Watergate, to the 9/11 attacks. A graduate of Smith College, she early on worked as a researcher for John Le Carre. She has written for Salon, National Journal, the UK's Daily Telegraph, Observer, Independent, and The Irish Times. She has contributed to documentaries for PBS, A&E, History Channel, CNN, and the BBC. Swan and Summers have both written for Vanity Fair.