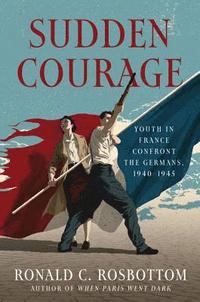 av Ronald C Rosbottom
Inbunden Engelska, 2019-06-17
167
Köp
Spara som favorit
Skickas inom 5-8 vardagar.
Fri frakt inom Sverige för privatpersoner.
Finns även som
Visa alla 2 format & utgåvor
The author of the acclaimed When Paris Went Dark, longlisted for the National Book Award, returns to World War II once again to tell the incredible story of the youngest members of the French Resistance-many only teenagers-who waged a hidden war against the Nazi occupiers and their collaborators in Paris and across France. On June 14, 1940, German tanks rolled into Paris. Eight days later, France accepted a humiliating defeat and foreign occupation. Most citizens adapted and many even allied themselves with the new fascist leadership. Yet others refused to capitulate; in answer to the ruthless violence, shortages, and curfews imposed by the Nazis, a resistance arose. Among this shadow army were Jews, immigrants, communists, workers, writers, police officers, shop owners, including many young people in their teens and twenties. Ronald Rosbottom tells the riveting story of how those brave and untested youth went from learning about literature to learning the art of sabotage, from figuring out how to solve an equation to how to stealthily avoid patrols, from passing notes to stealing secrets-and even learning how to kill. The standard challenges of adolescence were amplified and distorted. Sudden Courage brilliantly evokes this dark and uncertain period, from the beginning of the occupation until the last German left French soil. A chronicle of youthful sacrifice and courage in the face of evil, it is a story that holds relevance for our own time, when democratic nations are once again under threat from rising nativism and authoritarianism. Beyond that, it is a riveting investigation about what it means for a young person to come of age under unpredictable and violent circumstances.
Visa hela texten

&#8220Following up on his marvelous...When Paris Went Dark, Ronald Rosbottom now recounts movingly the inspiring story of young people who resisted the Nazi occupation. With far-right forces rising again in Europe and the United States one can only hope that such sudden courage will not be needed again." -- William Taubman, Pulitzer Prize-winning author of <em>Khrushchev: The Man and His Era</em>,<em> </em>and of<em> </em><em>Gorbachev: His Life and Times</em> "Ron Rosbottom brings his demonstrated mastery of the German occupation of France, plus decades as a college professor, to vividly revise our understanding of the French resistance, and how dependent it was upon the energy and moral courage of very young women and men." -- Joseph J. Ellis, Pulitzer Prize-winning author of <em>American Dialogue: The Founders and Us</em> &#8220Active resistance to the Nazi occupation of France in 1940 to1944 often depended on young people. The adolescents among them brought special assets to dangerous actions and faced stresses particular to their age. Ronald Rosbottom explores these matters sensitively and vividly. . . .A thoughtful and stirring book." -- Robert O. Paxton, professor emeritus of history, Columbia University, and author of <em>Vichy France: Old Guard and New Order</em> &#8220Ronald Rosbottom masterfully explores the crucial role played by the young people of France, many still in their teens, in resisting the Nazis during World War II." -- Lynne Olson, author of <em>Madame Fourcade's Secret War</em> "An exceptional account about the French Resistance... Highly recommended for Francophiles and those interested in World War II." -- Library Journal <strong>(starred review)</strong> "Captivating... a moving chronicle of youthful courage and sacrifice." -- Publishers Weekly &#8220A fine history that brings back to light the contributions of the younger, often forgotten resistance fighters." -- Kirkus Reviews &#8220A complicated and inspiring portrait of youthful resistants: their successes, their failures, their occasional inconsistency and their undoubted courage." -- Shelf Awareness &#8220A fine story-teller... has many inspirational tales to tell." -- Wall Street Journal

Ronald C. Rosbottom is the Winifred L. Arms Professor in the Arts and Humanities and a professor of French, European Studies, and Architectural Studies at Amherst College. Previously he was Dean of the Faculty at Amherst; he is a Chevalier de l'Academie des Palmes Academiques. His previous book, When Paris Went Dark: The City of Light Under German Occupation, 1940-1944, was longlisted for the National Book Award for Nonfiction. He divides his time between Amherst, Massachusetts, and Paris.