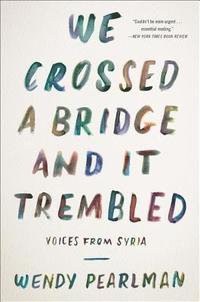 We Crossed a Bridge and It Trembled

av Wendy Pearlman
Häftad Engelska, 2018-08-09
139
Köp
Spara som favorit
Skickas inom 5-8 vardagar.
Fri frakt inom Sverige för privatpersoner.
Finns även som
Visa alla 1 format & utgåvor
LONG-LISTED FOR THE CARNEGIE MEDAL Reminiscent of the work of Nobel Prize winner Svetlana Alexievich, an astonishing collection of intimate wartime testimonies and poetic fragments from a cross-section of Syrians whose lives have been transformed by revolution, war, and flight. Against the backdrop of the wave of demonstrations known as the Arab Spring, in 2011 hundreds of thousands of Syrians took to the streets demanding freedom, democracy and human rights. The government's ferocious response, and the refusal of the demonstrators to back down, sparked a brutal civil war that over the past five years has escalated into the worst humanitarian catastrophe of our times. Yet despite all the reporting, the video, and the wrenching photography, the stories of ordinary Syrians remain unheard, while the stories told about them have been distorted by broad brush dread and political expediency. This fierce and poignant collection changes that. Based on interviews with hundreds of displaced Syrians conducted over four years across the Middle East and Europe, We Crossed a Bridge and It Trembled is a breathtaking mosaic of first-hand testimonials from the frontlines. Some of the testimonies are several pages long, eloquent narratives that could stand alone as short stories; others are only a few sentences, poetic and aphoristic. Together, they cohere into an unforgettable chronicle that is not only a testament to the power of storytelling but to the strength of those who face darkness with hope, courage, and moral conviction.
Visa hela texten

"Many of these voices are unforgettable...Pearlman shapes her subjects' narratives, winnowing interviews down to stirring examples of human adaptation...essential reading." -- <strong><em>New York Times Book Review</em></strong> "Heart-stopping...Syrians, Pearlman writes, are too often cast as 'victims to be pitied, bodies to be sheltered, radicals to be denounced or threats to be feared ... it can be difficult to find chances to listen to actual Syrians as human beings'. But she has listened." -- <strong><em>The Guardian</em></strong> "Pearlman spoke with hundreds of displaced Syrians.... Common among the spare and haunting testimonies of these mothers, fathers, brothers, and sisters are the loss and reappearance of hope, humanity, and dreams of new freedom. This powerfully edifying work of witness is essential reading." -- <em>Booklist </em>(starred review) "A heartbreaking, human, and necessary book. Recommended for anyone who wishes to better understand the Syrian conflict." -- <strong><em>Library Journal</em></strong> "It's unsurprising to see the anger not just toward Syrian president Bashar al-Assad but also toward the international community...Nonetheless, the book is filled with hope, informed by an understanding of the unity possible in spite of the discord sowed by Assad." -- <strong><em>Publishers Weekly (starred review)</em></strong> "A timely and useful exploration into the events leading up to and following the Syrian uprising and ongoing refugee crisis." -- <strong><em>VICE</em></strong> "A gut-wrenching collection of true experiences of Syrians whose lives have been transformed, often torn apart, by the ongoing conflict. A breathtaking yet haunting work of nonfiction, this necessary book could not have come at a better time." -- <em>Bustle</em> "Profoundly important...Pearlman, an accomplished political scientist, has chosen to let her Syrian interlocutors speak for themselves. What emerges is a complex, engaging and difficult oral history, which deserves a wide readership." -- <strong>Mark Lynch, Professor of Political Science at George Washington University and author of <em>The New Arab Wars: Anarchy and Uprising in the Middle East</em> and <em>The Arab Uprising: The Unfinished Revolutions of the New Middle East</em></stro "An important book for anyone who wants to understand the root causes of the Syrian tragedy...There are many different competing "realities" of the Syrian conflict and the many voices recorded in this book capture this perfectly." -- Andreas Kruger, Ambassador for the Negotiations on Syria, Federal Foreign Office of Germany "Incendiary-this heart-wrenching testament could not be more timely. Beyond headlines or breaking news or political posturing, this work of witness allows real people to expose Syria's terrifying heart." -- <strong>Luis Alberto Urrea, author of <em>The Devil's Highway</em></em> and <em>Into The Beautiful North</em></strong></em> "The West has been repeatedly numbed to the human rights travesty of the authoritarian Assad regime-or worse, encouraged to think of its victims as outsiders-but these accounts fly in the face of that selfish idea." -- <em><strong>Elle.com</strong></em> "An important work -- vivid, moving, and unforgettable." -- <strong><em>Omnivoracious</em></strong> "A moving collection of personal accounts from Syrians covering the time before the conflict with Bashar Al-Assad to now." -- <strong><em>Rebellious Magazine</em></strong> "Profoundly important...Pearlman, an accomplished political scientist, has chos

Bloggat om We Crossed a Bridge and It Trembled

Wendy Pearlman is a professor and award-winning teacher at Northwestern University, specializing in Middle East politics. Educated at Harvard, Georgetown, and Brown, Pearlman speaks fluent Arabic and has spent more than twenty years studying and living in the Arab World. She is the author of numerous articles and two books, Occupied Voices: Stories of Everyday Life from the Second Intifada (Nation Books, 2003) and Violence, Nonviolence, and the Palestinian National Movement (Cambridge University Press, 2011). She lives in Chicago, Illinois.