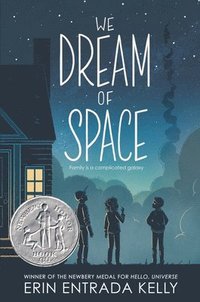 We Dream of Space

av Erin Entrada Kelly
Inbunden Engelska, 2020-06-11
6-9 år
179
Köp
Spara som favorit
Finns även som
Visa alla 4 format & utgåvor
A Newbery Honor Book * BookPage Best Books * Chicago Public Library Best Fiction * Goodreads Choice Awards Nominee * Horn Book Fanfare * New York Times Notable Children's Book * School Library Journal Best Book * Today Show Pick * An ALA Notable Book "A 10 out of 10 . . . Anyone interested in science, sibling relationships, and friendships will enjoy reading We Dream of Space."-Time for Kids Newbery Medalist and New York Times-bestselling author Erin Entrada Kelly transports readers to 1986 and introduces them to the unforgettable Cash, Fitch, and Bird Nelson Thomas in this pitch-perfect middle grade novel about family, friendship, science, and exploration. This acclaimed Newbery Honor Book is a great choice for readers of Kate DiCamillo, Rita Williams-Garcia, and Rebecca Stead. Cash, Fitch, and Bird Nelson Thomas are three siblings in seventh grade together in Park, Delaware. In 1986, as the country waits expectantly for the launch of the space shuttle Challenger, they each struggle with their own personal anxieties. Cash, who loves basketball but has a newly broken wrist, is in danger of failing seventh grade for the second time. Fitch spends every afternoon playing Major Havoc at the arcade on Main and wrestles with an explosive temper that he doesn't understand. And Bird, his twelve-year-old twin, dreams of being NASA's first female shuttle commander, but feels like she's disappearing. The Nelson Thomas children exist in their own orbits, circling a tense and unpredictable household, with little in common except an enthusiastic science teacher named Ms. Salonga. As the launch of the Challenger approaches, Ms. Salonga gives her students a project-they are separated into spacecraft crews and must create and complete a mission. When the fated day finally arrives, it changes all of their lives and brings them together in unexpected ways. Told in three alternating points of view, We Dream of Space is an unforgettable and thematically rich novel for middle grade readers. We Dream of Space is illustrated throughout by the author.
Visa hela texten

"Newbery Medal-winning Kelly contemplates space exploration and sibling bonds in her latest captivating novel. . . . Another wondrous title from a remarkably talented author." -- <em>Booklist </em><strong>(starred review)</strong> "Newbery Award-winner Kelly follows three Delaware siblings in the weeks leading up to the January 1986 launch of the Challenger. . . . Kelly shows the incredible power of words-the irreparable damage they inflict and their ability to uplift-while crafting a captivating story about family's enduring bonds." -- <em>Publishers Weekly</em> <strong>(starred review)</strong> "Entrada Kelly tells the story . . . of Cash, Fitch and Bird . . . [and their] power to form the family they want themselves. Lyrical but direct writing, relatable characters, and an engaging 1980s setting give this thoughtful read high appeal for middle grade readers." -- School Library Journal <strong>(starred review)</strong> "With short chapters focusing alternately on each sibling, Kelly establishes distinct and original characters . . . Kelly creates a crisp, moving portrait of family dysfunction and the resilience of the young." -- Horn Book <strong>(starred review)</strong> "It's January, 1986, and each of the three Nelson Thomas siblings has a focus. . . , Bird, who loves science and engineering and imagines nightly conversations with Challenger astronaut Judith Resnik . . . [is] the calm core of the novel, but readers in the know will feel the tension ramping up as the much-awaited launch date comes closer. . . . Newbery winner Kelly is particularly skillful in weaving the event into the lives of her characters . . . Perceptive." -- Bulletin of the Center for Children's Books <strong>(starred review)</strong> "We Dream of Space offers an exceptional portrayal of the endless ways in which parental dysfunction affects every member of a family. It's also a celebration of the need for optimism, compassion and teamwork in the face of disasters both individual and communal." -- BookPage.com <strong>(starred review)</strong> "Kelly writes a heartfelt story of family and the bond of siblings. . . . Put this book in your orbit." -- <em>Kirkus Reviews</em> "In this captivating follow-up to her Newbery Medal-winning "Hello, Universe," Kelly . . . has a minimalist's knack for gesturing beyond what's on the page. . . . We Dream of Space moves gracefully between small-scale middle school dilemmas and galaxy-size existential questions, such as whether we should go into space at all. Bird, "just a girl in Park, Delaware," can't stop thinking about being a speck of cosmic dust. Thanks to exuberant Ms. Salonga, there's lots of space lore in the novel. Notably, the characters most interested in science are female. . . . A hard-won, timeless lesson." -- <em>New York Times Book Review</em> "As the country awaits the launch of the space shuttle Challenger, three very different siblings-Cash, Fitch, and Bird-must navigate challenges of their own. . . . A 10 out of 10 . . . Anyone interested in science, sibling relationships, and friendships will enjoy reading We Dream of Space." -- Time for Kids "Kelly's skill at mapping the bonds of family shine here-you'll root for these three [characters] as they develop hard-won resilience." -- Austin American-Statesman "This moving book follows a family in January 1986 on the precipice of so much-siblings Bird, Fitch, and Cash are all in the same grade, and . . . the siblings are hanging on . . . through their shared science teacher. . . . This slice-of-life book is aching and hard, and when the Challenger launches, all of the pain built up in each of the siblings explodes. Readers who want feelings-heavy books will be enraptured with this one. All of the characters

New York Times-bestselling author Erin Entrada Kelly was awarded the Newbery Medal for Hello, Universe and a Newbery Honor for We Dream of Space. She grew up in Lake Charles, Louisiana, and now lives in Delaware. She is a professor of children's literature in the graduate fiction and publishing programs at Rosemont College, where she earned her MFA, and is on the faculty at Hamline University. Her short fiction has been nominated for the Philippines Free Press Literary Award for Short Fiction and the Pushcart Prize. Erin Entrada Kelly's debut novel, Blackbird Fly, was a Kirkus Best Book, a School Library Journal Best Book, an ALSC Notable Book, and an Asian/Pacific American Literature Honor Book. She is also the author of The Land of Forgotten Girls, winner of the Asian/Pacific American Award for Literature; You Go First, a Spring 2018 Indie Next Pick; Lalani of the Distant Sea, an Indie Next Pick; and Maybe Maybe Marisol Rainey, which she also illustrated. The author's mother was the first in her family to immigrate to the United States from the Philippines, and she now lives in Cebu.