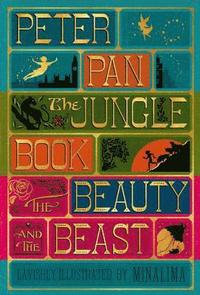 J. M. Barrie (1860-1937) was a Scottish playwright and novelist best remembered for creating the character Peter Pan. The mischievous boy first appeared in Barrie's novel The Little White Bird in 1902 and then later in Barrie's most famous work, Peter Pan, or The Boy Who Wouldn't Grow Up, which premiered on stage in 1904 and was later adapted into a novel in 1911. An imaginative tale about a boy who can fly and never ages, the story of Peter Pan continues to delight generations around the world and has become one of the most beloved children's stories of all time. Peter's magical adventures with Tinker Bell, the Darling children, and Captain Hook have been adapted into a variety of films, television shows, and musicals. Rudyard Kipling was born in Bombay (now known as Mumbai), India, but returned with his parents to England at the age of five. Among Kipling's best-known works are The Jungle Book, Just So Stories, and the poems "Mandalay" and "Gunga Din." Kipling was the first English-language writer to receive the Nobel Prize for literature (1907) and was among the youngest to have received the award.