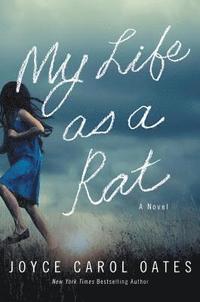 My Life as a Rat

av Joyce Carol Oates
Inbunden Engelska, 2019-07-10
162
Köp
Spara som favorit
Skickas inom 3-6 vardagar.
Gratis frakt inom Sverige över 159 kr för privatpersoner.
Finns även som
Visa alla 1 format & utgåvor
"A painful truth of family life: the most tender emotions can change in an instant. You think your parents love you but is it you they love, or the child who is theirs?" --Joyce Carol Oates, My Life as a Rat Which should prevail: loyalty to family or loyalty to the truth? Is telling the truth ever a mistake and is lying for one's family ever justified? Can one do the right thing, but bitterly regret it? My Life as a Rat follows Violet Rue Kerrigan, a young woman who looks back upon her life in exile from her family following her testimony, at age twelve, concerning what she knew to be the racist murder of an African-American boy by her older brothers. In a succession of vividly recalled episodes Violet contemplates the circumstances of her life as the initially beloved youngest child of seven Kerrigan children who inadvertently "informs" on her brothers, setting into motion their arrests and convictions and her own long estrangement. Arresting and poignant, My Life as a Rat traces a life of banishment from a family-banishment from parents, siblings, and the Church-that forces Violet to discover her own identity, to break the powerful spell of family, and to emerge from her long exile as a "rat" into a transformed life.
Visa hela texten

"Oates's novel adroitly touches on race, loyalty, misogyny, and class inequality while also telling a moving story with a winning narrator. This book should please her fans and win her new ones."--Publishers Weekly

Joyce Carol Oates is a recipient of the National Medal of Humanities, the National Book Critics Circle Ivan Sandrof Lifetime Achievement Award, the National Book Award, and the PEN/Malamud Award for Excellence in Short Fiction, and has been several times nominated for the Pulitzer Prize. She has written some of the most enduring fiction of our time, including the national bestsellers We Were the Mulvaneys, Blonde, which was nominated for the National Book Award, and the New York Times bestseller The Falls, which won the 2005 Prix Femina. Her most recent novel is A Book of American Martyrs. She is the Roger S. Berlind Distinguished Professor of the Humanities at Princeton University and has been a member of the American Academy of Arts and Letters since 1978.