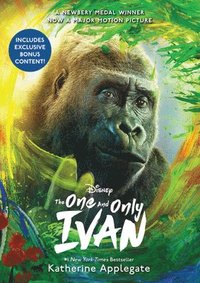 One And Only Ivan Movie Tie-In Edition

This unforgettable novel from renowned author Katherine Applegate celebrates the transformative power of unexpected friendship. Inspired by the true story of a captive gorilla known as Ivan, this illustrated book is told from the point of view of Ivan himself.

Ivan is an easy-going gorilla. Living at the Exit 8 Big Top Mall and Video Arcade, he has grown accustomed to humans watching him through the glass walls of his domain. He rarely misses his life in the jungle. Mostly, he thinks about art. Then he meets Ruby, a baby elephant taken from her family, and she makes Ivan see their home?and his own art?through new eyes. When Ruby arrives, change comes with her, and it's up to Ivan to make it a change for the better.

The One and Only Ivan was hailed as a best book of the year by Kirkus, School Library Journal, and Amazon and earned four starred reviews.

In the tradition of timeless stories like Charlotte's Web and Stuart Little, Katherine Applegate blends humor and poignancy to create Ivan's unforgettable first-person narration in a story of friendship, art, and hope. An author's note depicts the differences between the fictional story and true events.

And don't miss the sequel to this beloved modern classic?The One and Only Bob!
Visa hela texten