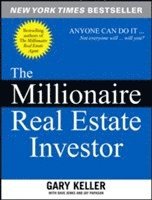 av Gary Keller
Häftad Engelska, 2005-04-01
235
Köp
Spara som favorit
This book is not just a bargain, its a steal. Its filled with practical, workable advice for anyone wanting to build wealth.Mike Summey, co-author of the bestselling the weekend millionaires secrets to investing in real estate

anyone who seeks financial wealth must first learn the fundamental truths and models that drive it. The Millionaire Real Estate Investor represents the collected wisdom and experience of over 100 millionaire investors from all walks of life who pursued financial wealth and achieved the life-changing freedom it delivers. This book--in straightforward, no nonsense, easy-to-read style--reveals their proven strategies.

The Millionaire Real Estate Investor is your handbook to the tried and true financial wealth building vehicle that rewards patience and perseverance and is available to all--real estate. You'll learn:

The Millionaire Real Estate Investor is about you and your money. It's about your financial potential. It's about discovering the millionaire investor in you.
Visa hela texten

Gary Keller is Chairman of the Board of Keller Williams Realty International. Keller is responsible for providing strategic direction for all Keller Williams divisions and affiliate companies, including Keller Williams University, kw.com, homesbyAuction.com, and the agent-led Eagentc.com. Keller established Keller Williams with partner Joe Williams in 1983. The company began franchising in 1987 and expanded to Canada in 1998. From 1995 to present, Keller Williams has become one of the fastest growing real estate companies in the United States with sales and commissions growth topping 700% during that period. A native of Houston, Texas, Keller attended Baylor University, where he earned a B.B.A. in Marketing and Real Estate in 1979. Keller began his real estate career as an agent and later manager in the JB Goodwin Company from 1979 to 1983. Keller is a member of the Austin Board of Realtors, the Texas Association of Realtors, and the Austin Multiple Listing Service. Keller was nominated and later appointed to the NATIONAL ASSOCIATION OF REALTORS Board of Directors in 2000. He has served on the Board of the Austin Jaycees, the Board of Directors of the Austin Center for Battered Women, and been listed in Oxfords Whos Who of Young Professionals. An accomplished teacher in all aspects of residential real estate, Gary is a strong proponent of professional education. Beyond his role overseeing the vision and implementation of Keller Williams University, Keller actively pursues mentoring and consulting relationships within and without the company. Keller is married to Mary Pfluger; they have one child, John Christian. He is a musician -- guitar and piano -- and enjoys reading, hiking, traveling, antiques, movies, football, basketball, and spending as much time as possible with his family.