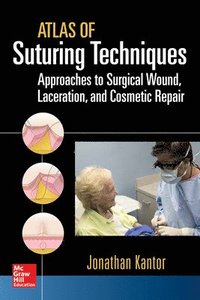 Atlas of Suturing Techniques: Approaches to Surgical Wound, Laceration, and Wound Repair presents the building blocks of suturing and wound repair in an at-a-glance, economical atlas format. In its pages, the author shares his vast expertise and it is his intention to help physicians across many specialties to improve outcomes for patients requiring repair of any wound. Starting with chapters on principles of wound management and wound repair, the atlas then moves on to equipment, positioning, and other key principles. The next section covers 75 suture techniques, providing detailed step-by-step instructions adjacent to drawings and photos of the techniques. Finally, the last section covers each area of anatomy, guiding you in what suture to use when, how to modify certain sutures in specific locations, and even how to prepare and execute skin grafts.

Atlas of Suturing Techniques: Approaches to Surgical Wound, Laceration, and Wound Repair goes beyond the scope of other texts, which often limit their focus to either general operative principles or the specific use of flaps in particular reconstructive areas, such as facial and nasal reconstruction. While these texts provide insufficient coverage of actual suture placement techniques, this one-stop resource excels at providing a clear, easy-to-follow atlas of suturingone that enables you to prevent scars and other negative patient outcomes. Unfortunately, even the best designed repair can be undone by less-than-optimal suturing techniques.

Jonathan Kantor, MD, MSCE, MA is an international authority on dermatology and skin surgery, who speaks frequently around the world on surgical techniques, skin cancer, atypical moles, wound healing, and other topics. He has authored more than 75 research articles, book chapters, and abstracts, and is active on the national level and in his local community. Dr. Kantor serves as Medical Director, Florida Center for Dermatology, PA as well as Adjunct Assistant Professor of Dermatology at the Perelman School of Medicine at the University of Pennsylvania, the nation's oldest and top-ranked academic dermatology department. Dr. Kantor's work has been published in every major dermatology journal, and his research has been quoted in the lay press on television, in newspapers, and in magazines such as Prevention, Reader's Digest, Self, and Fitness. One of the benchmark surgical techniques developed by Dr. Kantor, the set-back dermal suture, was the subject of a randomized controlled trial performed at the University of California, as well as a major journal editorial, where it was shown to be superior to the former gold standard technique-potentially changing the standard approach to surgical wound repair. Dr. Kantor serves as a member of the Editorial Board for the Journal of the American Academy of Dermatology, and is a member of the American Academy of Dermatology's Professionalism and Ethics Committee, where he chairs a workgroup. He has also been awarded the Member Making a Difference Award by the American Academy of Dermatology, the Academy's highest award offered for volunteerism. Dr. Kantor received his B.A. in Intellectual History from the University of Pennsylvania magna cum laude and was elected Phi Beta Kappa as an undergraduate. He then pursued broader interests and was awarded a Master's degree in history and entered the Ph.D. program in history at Penn, which he left to begin his formal medical training. During his medical studies, Dr. Kantor earned a National Institutes of Health (NIH) funded fellowship in clinical epidemiology and was awarded both an M.D. as well as a Masters of Science in Clinical Epidemiology.

2. equipment and positioning: having the right props

3. principles of suture placement: shifting the tension to deeper structures

A. Chest and back