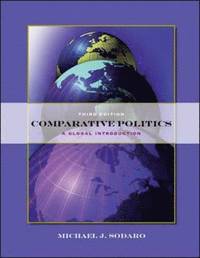 av Michael J Sodaro
Häftad Engelska, 2007-06-01
1819
Bevaka
Spara som favorit
Tillfälligt slut – klicka "Bevaka" för att få ett mejl så fort boken går att köpa igen.
Comparative Politics: A Global Introduction presents a uniquely comprehensive approach to the study of politics in a variety of countries. Part I surveys the core topics of comparative politics and equips students with the concepts and analytical methods they need to understand the complexities of todays political world. Part I enhances critical thinking skills by explaining in a step-by-step fashion how the basic techniques of the scientific method, such as qualitative hypothesis testing, can be used to understand political realities. Part II provides in-depth studies of many major countries, using the concepts and analytical techniques introduced in Part I. By combining rich conceptualization, analytical methods, and extensive coverage of a diversity of countries, this engaging text teaches introductory-level students how to think about politics for themselves, logically and systematically.
Visa hela texten

Michael Joseph Sodaro is the principal author and editor of "Comparative Politics: A Global Introduction". As Professor Political Science and International Affairs at the George Washington University he is a member of the Institute for European, Russian and Eurasion Studies at George Washington's Elliott School of International Affairs. He has a BA from Fordham Univeristy,and MA from the School of Advanced International Studies of the Johns Hopkins University, and a Ph.D. from Columbia University. He earned a cerficate at the Institut d'Etudes Politiques in Paris and has conducted research in France, Germany, Italy, and Russia. He is the reciepient of the Marshall Shulman prize for his book, "Moscow, Germany and the West from Khrushchev to Gorbachev" (Cornewll, 1990) and the Oscar and Shoshana Trachtenberg prize for excellence in teaching at George Washington.

Part One. Concepts and Critical Thinking

1. Comparative Politics: What Is It? Why Study It?

5. The State and Its Institutions

8. Democracy: How Does It Work? State Institutions and Electoral Systems

9. Democracy: What Does It Take? Ten Conditions

10. Conditions for Democracy in Afghanistan and Iraq

11. People and Politics: Participation in Democracies and Nondemocracies

15. The Politics of Development

16. The United Kingdom of Great Britain and Northern Ireland