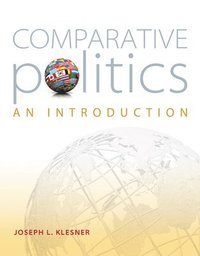 av Joseph Klesner
Häftad Engelska
2539
Köp
Spara som favorit
Specialorder (osäker tillgång). Skickas inom 11-20 vardagar.
Fri frakt inom Sverige för privatpersoner.
Comparative Politics: A Global Introduction shows new students of world politics how the methods and concepts of comparative politics can lead them to ask critical questions to better understand the complex world around them. The majority of undergraduates in introductory comparative politics courses do not plan to pursue graduate education in political science nor embark upon careers as political scientists. Most hope to take part in public and perhaps international affairs as elected officials, civil servants, or engaged citizens. As such they will need to make countless decisions about public policy, including foreign policy, throughout their careers. Comparative Politics: A Global Introduction equips students to make better, more informed decisions. Central to that task are three important goals: (1) to introduce readers to the conceptual foundations of comparative politics, (2) to enhance their analytical and critical-thinking skills through an introduction to basic empirical techniques of political and social science, and (3) to promote their understanding of a wide range of countries and political leaders.
Visa hela texten

PART ONE CONCEPTS AND CRITICAL THINKING

3. The State and Its Institutions

6. Democracy: How Does It Work?

7. Democracy: What Does It Take?

12. The Politics of Development