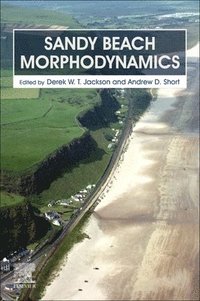 av Derek Jackson
Häftad Engelska, 2020-05-20
1209
Köp
Spara som favorit
Kan levereras innan julafton!
Sandy beaches represent some of the most dynamic environments on Earth and examining their morphodynamic behaviour over different temporal and spatial scales is challenging, relying on multidisciplinary approaches and techniques. Sandy Beach Morphodynamics brings together the latest research on beach systems and their morphodynamics and the ways in which they are studied in 29 chapters that review the full spectrum of beach morphodynamics. The chapters are written by leading experts in the field and provide introductory level understanding of physical processes and resulting landforms, along with more advanced discussions.

Derek Jackson is a coastal geomorphologist whose research focus is on coastal environmental change (morphodynamics and geomorphology) at a number of spatial and temporal scales and works on beach and dune systems at various international sites from Europe to South Africa. These research efforts link into themes such as climate change impacts, its associated sea level rise and increased storminess on coastlines. Much of his work undertaken to date ultimately helps in the development of responses to global climate change and pressures on natural beach and dune systems internationally. He has published widely in these fields, sits on several UK and international research panels and is currently co-director of the Centre for Coastal & Marine Research at Ulster University. Andrew Short is a marine scientist specializing in coastal processes and beach dynamics. He has degrees from the University of Sydney, University of Hawaii and Louisiana State University and has worked on the coasts of North and South America, including north Alaska and Hawaii, Europe, New Zealand and the entire Australian coast. He is presently Honorary Professor in the School of Geosciences at the University of Sydney; Adjunct Professor in the Griffith (University) Centre for Coastal Management; Senior Coastal Scientist (part-time) with CoastalCOMS.com; Scientific Adviser to Surf Life Saving Australia; Deputy Chair of National Surfing Reserves (Australia); and on the Executive Committee of World Surfing Reserves. Short has investigated all 10,685 Australian beaches plus another 1500 on 30 major islands. This information is available on line and has been written up in eight books, one for each state and territory. He has written 12 books and over 200 scientific publications. His extensive contribution to both coastal science and beach safety was recognized in 2010 with an Order of Australia Medal.