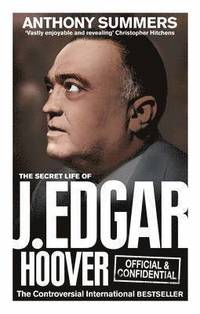 Official and Confidential: The Secret Life of J Edgar Hoover

av Anthony Summers
Häftad Engelska, 2012-01-05
289
Köp
Spara som favorit
Specialorder (osäker tillgång). Skickas inom 11-20 vardagar.
Fri frakt inom Sverige för privatpersoner.
Finns även som
Visa alla 1 format & utgåvor
For nearly fifty years, J. Edgar Hoover held great power in the United States. The creator of the FBI and its Director until his death, he played a role in nearly every major tragedy and scandal in America during the twentieth century. Hoover was lauded when he died as an American hero. Anthony Summers' controversial bestseller, Official & Confidential, The Secret Life of J. Edgar Hoover, draws on more than 800 interviews to explode the myths, exposing the dark secrets that remained hidden throughout Hoover's lifetime. Hoover used his intimate knowledge of the John F. Kennedy's sex life to ensure that Lyndon B. Johnson became Vice President, and suppressed evidence about J.F.K's assassination. Hoover himself, meanwhile, was a closet homosexual, which allegedly led to him being blackmailed by the Mafia. This fascinating book reveals that even Hoover's death, on the eve of Watergate, was clouded with mystery. Witnesses have indicated that, in the panic over the secrets he was holding over President Nixon, an operation was mounted to break into his house - possibly even to murder him.
Visa hela texten

The book is more exciting, and more damning, than the film...This is bold, excoriating, unmissable stuff. * Independent on Sunday * Garbage... Innuendo, lies -- Cartha DeLoach, former close aide to Hoover The exposure we have been waiting for these last forty years -- Norman Mailer Summers' book is not just a history of a single hero-sized hypocrite, it is a history of a vast national delusion -- Hilary Mantel * Spectator * I read Official and Confidential with mounting horror, fascination, revulsion... Enthralling -- Paul Theroux

Anthony Summers is a writer, journalist and television producer . After education at Oxford University, he began his career in television with Granada TV's 'World in Action' investigative current affairs program. He moved on to the BBC, traveling worldwide and becoming a Deputy Editor of the flagship 'Panorama' program. Coverage for the BBC included the Vietnam War and the Middle East conflict, and - extensively - the United States, notably the Martin Luther King assassination and Robert Kennedy's presidential bid. He is the bestselling author of The File on the Tsar (1976), The Kennedy Conspiracy (1980), Goddess: The Secret Lives of Marilyn Monroe (1985), Honeytrap (1987), Not in Your Lifetime: The definitive book on the J.F.K. Assassination (1998), The Arrogance of Power: The Secret World of Richard Nixon (1998), Sinatra: The Life (2005) and The Eleventh Day: The Full Story of 9/11 & Osama bin Laden (2011). Anthony lives in Ireland with his wife and three children.