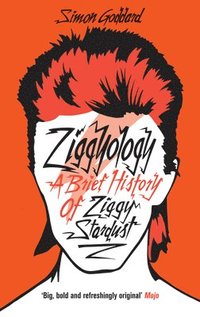 A Brief History of Ziggy Stardust

av Simon Goddard
Häftad Engelska, 2015-05-07
129
Köp
Spara som favorit
Skickas inom 5-8 vardagar.
Fri frakt inom Sverige för privatpersoner.
He came from Outer Space... It was the greatest invention in the history of pop music - the rock god who came from the stars - which struck a young David Bowie like a lightning bolt from the heavens. When Ziggy the glam alien messiah fell to Earth, he transformed Bowie from a prodigy to a superstar who changed the face of music forever. But who was Ziggy Stardust? And where did he really come from? In a work of supreme pop archaeology, Simon Goddard unearths every influence that brought Ziggy to life - from HG Wells to Holst, Kabuki to Kubrick, and Elvis to Iggy. Ziggyology documents the epic drama of the Starman's short but eventful time on Planet Earth... and why Bowie eventually had to kill him.
Visa hela texten

A great deal of research has gone into Ziggyology... Ziggy becomes a forcefield of fabulation, an imaginative cartography through and to whom all manner of ley lines pass...ingeniously and entertainingly (rendered) * Guardian * If you've been enjoying David Bowie's comeback, you'll relish Simon Goddard's offbeat paean of man-love to his earlier incarnation. Goddard offers a thrillingly unusual slant on how Ziggy Stardust...came into being * The Observer * A tremendous account * Q Magazine **** * Does for David Bowie what Greil Marcus's Lipstick Traces did for the Sex Pistols... Big, bold and refreshingly original... It's Ziggy as experienced from the alien inside * MOJO Magazine **** * Dazzlingly pulls together all the vibrant strands that made up the star-spun cloth of Ziggy. Goddard is the aficionado. -- Gary Kemp

Simon Goddard is a freelance UK music journalist whose work has appeared in, amongst others, Q magazine, Uncut and the Independent On Sunday. He is best known for his two previous books on The Smiths and their former lead singer Morrissey. His first, Songs That Saved Your Life, was named 'the best Smiths book' by the Guardian and was followed up by the critically acclaimed Mozipedia - The Encyclopedia Of Morrissey and The Smiths. He lives in London.