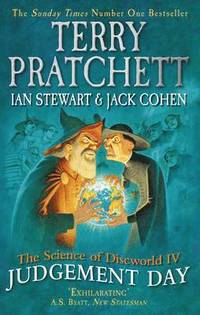 The Science of Discworld IV

av Terry Pratchett, Ian Stewart, Jack Cohen
(3 röster)
Häftad Engelska, 2014-03-03
119
Köp
Spara som favorit
Skickas inom 7-10 vardagar.
Fri frakt inom Sverige över 159 kr för privatpersoner.
Finns även som
Visa alla 1 format & utgåvor
The fourth book in the Science of Discworld series, and this time around dealing with THE REALLY BIG QUESTIONS, Terry Pratchett's brilliant new Discworld story Judgement Day is annotated with very big footnotes (the interleaving chapters) by mathematician Ian Stewart and biologist Jack Cohen, to bring you a mind-mangling combination of fiction, cutting-edge science and philosophy. Marjorie Daw is a librarian, and takes her job - and indeed the truth of words - very seriously. She doesn't know it, but her world and ours - Roundworld - is in big trouble. On Discworld, a colossal row is brewing... The Wizards of Unseen University feel responsible for Roundworld (as one would for a pet gerbil). After all, they brought it into existence by bungling an experiment in Quantum ThaumoDynamics. But legal action is being brought against them by Omnians, who say that the Wizards' god-like actions make a mockery of their noble religion. As the finest legal brains in Discworld (a zombie and a priest) gird their loins to do battle - and when the Great Big Thing in the High Energy Magic Laboratory is switched on - Marjorie Daw finds herself thrown across the multiverse and right in the middle of the whole explosive affair. As God, the Universe and, frankly, Everything Else is investigated by the trio, you can expect world-bearing elephants, quantum gravity in the Escher-verse, evolutionary design, eternal inflation, dark matter, disbelief systems - and an in-depth study of how to invent a better mousetrap.
Visa hela texten

Ian Stewart (Author) Professor Ian Stewart is the author of many popular science books. He is the mathematics consultant for New Scientist and a Professor of Mathematics at the University of Warwick. He was awarded the Michael Faraday Prize for furthering the public understanding of science, and in 2001 became a Fellow of the Royal Society. Terry Pratchett (Author) Terry Pratchett was the acclaimed creator of the global bestselling Discworld series, the first of which, The Colour of Magic, was published in 1983. In all, he was the author of over fifty bestselling books. His novels have been widely adapted for stage and screen, and he was the winner of multiple prizes, including the Carnegie Medal, as well as being awarded a knighthood for services to literature. He died in March 2015. Jack Cohen (Author) Dr Jack Cohen is an internationally-known reproductive biologist, and lives in Newent, Gloucestershire. Jack has a laboratory in his kitchen, helps couples get pregnant by referring them to colleagues, invents biologically realistic aliens for science fiction writers and, in his spare time, throws boomerangs. Jack, who has more letters to his name than can be repeated here, writes, lectures, talks and campaigns to promote public awareness of science, particularly biology. He is mostly retired.