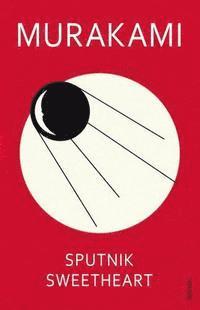 av Haruki Murakami
(1 röst)
Häftad Engelska, 2002-10-01
99
Köp
Spara som favorit
Skickas inom 5-8 vardagar.
Fri frakt inom Sverige över 159 kr för privatpersoner.
Finns även som
Visa alla 3 format & utgåvor
Twenty-two-year-old Sumire is in love with a woman seventeen years her senior. But whereas Miu is glamorous and successful, Sumire is an aspiring writer who dresses in an oversized second-hand coat and heavy boots like a character in a Kerouac novel. Surprised that she might, after all, be a lesbian, Sumire spends hours on the phone talking to her best friend K about the big questions in life: what is sexual desire and should she ever tell Miu how she feels for her. rustrated in his own love for Sumire, K consoles himself by having an affair with the mother of one of his pupils. Then a desperate Miu calls from a small Greek island and asks for his help, and he discovers something very strange has happened to Sumire.
Visa hela texten

"Sputnik Sweetheart has touched me deeper and pushed me further than anything I've read in a long time" -- Julie Myerson Guardian "How does Murakami manage to make poetry while writing of contemporary life and emotions? I am weak-kneed with admiration" Independent on Sunday "A beautiful novel, as light as a feather, and yet enduringly sad... a captivating book from one of the world's most interesting authors" Sunday Herald "Murakami has been compared to everyone from Raymond Carver to Raymond Chandler - which should tell you only one thing: he's unique" Independent "Confirms Murakami as a master of his craft... Out of this world" Time Out

Haruki Murakami was born in Kyoto in 1949 and now lives near Tokyo. He is the author of many novels as well as short stories and non-fiction. His works include Norwegian Wood, The Wind-Up Bird Chronicle, Kafka on the Shore, After Dark and What I Talk About When I Talk About Running. His work has been translated into more than forty languages, and the most recent of his many international honours is the Jerusalem Prize, whose previous recipients include J.M. Coetzee, Milan Kundera, and V.S. Naipaul.