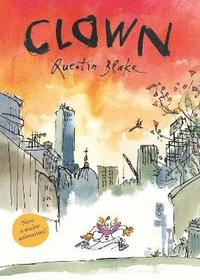 av Quentin Blake
Häftad Engelska, 1998-04-01
3-6 år
90
Köp
Spara som favorit
Watch Quentin Blake's Clown, a major new TV animation narrated by Helena Bonham-Carter, this Christmas on Channel 4. The perfect gift for sharing with friends and family all year long. When a box of toys is thrown away, a determined clown sets out to find a new loving home for himself and his friends. Told entirely through pictures, this award-winning and heart-warming adventure starring one of Sir Quentin Blake's own favourite characters is filled with hope, joy and friendship. Sir Quentin Blake is one of Britain's best-loved and most successful author-illustrators, and was made the Children's Laureate in 1999. He has won the Whitbread Award, the Hans Christian Andersen Award for Illustration, and the Kate Greenaway Medal among others. Praise for Clown: "I was gripped all the way through to the happy ending" Daily Telegraph "Quentin Blake, a master of graphic eloquence..." Guardian "An astonishing tour de force" Margaret Clark in Books for Keeps
Visa hela texten

Quentin Blake has been drawing ever since he can remember. He taught illustration for over twenty years at the Royal College of Art, of which he is an honorary professor. He has won many prizes, including the Hans Christian Andersen Award for Illustration, the Eleanor Farjeon Award and the Kate Greenaway Medal, and in 1999 he was appointed the first Children's Laureate. In the 2013 New Year's Honours List he was knighted for services to illustration.