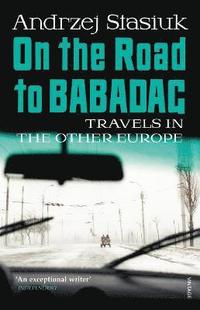 On the Road to Babadag

Travels in the Other Europe

av Andrzej Stasiuk
Häftad Engelska, 2012-07-05
139
Köp
Spara som favorit
Skickas inom 5-8 vardagar.
Gratis frakt inom Sverige över 159 kr för privatpersoner.
Finns även som
Visa alla 2 format & utgåvor
Andrzej Stasiuk is a restless and indefatigable traveller. His journeys - by car, train, bus, ferry - take him from his native Poland to small towns and villages with unfamiliar yet evocative names in Slovakia, Hungary, Romania, Slovenia, Albania, Moldova and Ukraine. Here is an unfamiliar Europe, grappling with the remnants of the Communist era and the arrival of capitalism and globalisation. 'Where did Moldova end and Transylvania begin,' he wonders, as he is being driven at breakneck speed in a hundred-year-old Audi - loose wires hanging from the dashboard - by a driver in shorts and bare feet, a cross swinging on his chest. And so his journey continues all the way to Babadag, near the shore of the Black Sea, where he sees his first minaret.
Visa hela texten

A eulogy for the old Europe, the Europe both in and out of time, the Europe now lost in the folds of the map, On the Road to Babadag is valuable reading for UK readers. If we can't read our way around Europe, how will we ever find our place, our identity, within it? * Guardian * This book has a peculiar charm and power * Literary Review * Stasiuk's journeys are vivid poetry... What formally also underpins Stasiuk's travels, and rather beautifully embodies his resistance to the future, is how his prose communicates the working of memory, mirroring its inconsequentiality. His accounts are fragmented, shuffled, continued later or not. Time breaks down as it is past; in his mind events cover space and time in an even, translucent layer -- Julian Evans * Prospect * The emptiness, the disconnectedness and the stasis deep inside Europe can be as emotionally transfixing and revelatory as the tumult of a city crowd on the Indian subcontinent. There are still places that insist the human condition is timeless... His eye is keen and his commentary as rich as they are throughout... The burgundy passports of Europe have spread across the region since this book first appeared in 2004. Time is on the march after all, and now English readers can enjoy the rewards of Stasiuk's entrancing attempt to stand in the way of progress. It's an exceptional writer who can rise to such an impossible challenge * Independent * A Kerouac-style amble from the Baltic to the Adriatic * International Herald Tribune *

Born in Warsaw in 1960, Andrzej Stasiuk has risen to become one of the most important and interesting writers at work in Eastern Europe today. Author of over a dozen books and winner of many prizes, he came to writing in an unusual way: in the early 1980s, he deserted the army and spent a year and a half in prison for it. Afterwards he wrote a collection of short stories, The Walls of Hebron, about his experience, which became a huge success. He and his wife, Monika Sznajderman, run a small publishing house in Czarne.