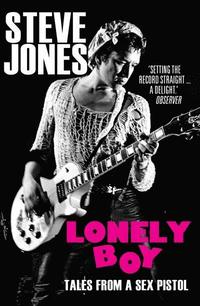 av Steve Jones
(1 röst)
Häftad Engelska, 2017-10-05
122
Köp
Spara som favorit
SOON TO BE A LIMITED SERIES DIRECTED BY DANNY BOYLE _____________________ Foreword by Chrissie Hynde Without the Sex Pistols there would be no punk rock, and without Steve Jones there would be no Sex Pistols. It was Steve who formed Kutie Jones and his Sex Pistols, the band that eventually went on to become the Sex Pistols, with his schoolmate Paul Cook and who was its original leader. As the world celebrates the 40th anniversary of Punk - the influence and cultural significance of which is felt in music, fashion and the visual arts to this day - Steve tells his story for the very first time. Rising from the streets of Hammersmith, Steve Jones was once a lonely, neglected boy living off his wits and petty thievery. Given purpose by the glam art rock of David Bowie and Roxy Music, he became one of the first generation of punks taken under the wings of Malcolm McLaren and Vivienne Westwood. For the very first time Steve describes the neglect and abuse he suffered at the hands of his stepfather, and how his interest in music and fashion saved him from a potential life of crime. From the Kings Road of the early seventies, through the years of the Sex Pistols, Punk Rock and the recording of Never Mind the Bollocks (ranked number 41 in Rolling Stone magazine's Best Albums of All Time), to his self-imposed exile in New York and Los Angeles where he battled with alcohol, heroin and sex addiction - caught in a cycle of rehab and relapse - Lonely Boy, written with music journalist and author Ben Thompson, is the story of an unlikely guitar hero who, with the Sex Pistols, changed history.
Visa hela texten

Lonely Boy is often eye-wateringly funny ... Jones is good at puncturing myth ... His book's a delight. * Observer, 'Music Book of the Day' * The Sex Pistols guitarist details his life - an impoverished Sixties childhood, sexual abuse and dalliances with crime - in a way that is both moving and candid. * Telegraph, 'Top 50 Books of the Year' * The Pistols' story, retold refreshingly and with added rumpage ... What's special about this book is its story arc, which will make the most hardened punk well up ... A poignant, honest, drily humorous rump-fest from a lost soul found. * Mojo * [An] absolute riot of revelation...[Jones] owns up to his failings with a colourful candour that is moving. -- Neil McCormick * Telegraph * It can be harrowing, hilarious, and often touching, but above all, Lonely Boy is life-affirming. Thank you, Steve Jones. * Sex-pistols.net *

Steve Jones was born in West London in 1955. He founded the Sex Pistols in 1972 with Paul Cook and Wally Nightingale and was their guitarist until the band broke up in 1978. He is a musician, record producer and actor. He lives in Los Angeles, where he hosts Jonesy's Jukebox on 95.5 KLOS FM and www.955KLOS.com every Monday to Friday between 12.00-2.00pm.