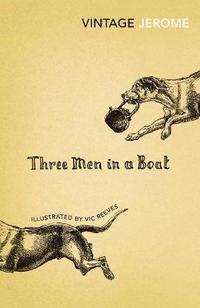 Three Men in a Boat

To Say Nothing of the Dog!

av Jerome K Jerome
Häftad Engelska, 2011-04-07
95
Köp
Spara som favorit
Skickas inom 5-8 vardagar.
Fri frakt inom Sverige över 159 kr för privatpersoner.
Finns även som
Visa alla 8 format & utgåvor
'I fell out of bed laughing at Three Men in a Boat' Guardian What could be more relaxing than a refreshing holiday on the river with your two best friends and faithful canine companion, Montmorency? However, as J. discovers, there is more to life on the waves than meets the eye - including navigational challenges, culinary disasters, and heroic battles with swans, kettles and tins of pineapple. Jerome K. Jerome's delightful novel has kept readers smiling for years and his prose has found a perfect partner in Vic Reeves's glorious and witty illustrations.
Visa hela texten

As well as being very funny, it captures the innocence of a time before adventure became synonymous with bungee jumping into ravines in faraway places * Observer * Brought laughter to a country in the throes of Victorian gloom * The Times * One of the funniest books I've ever read. I laughed out loud and that doesn't happen often -- Vic Reeves * Daily Express * A charming comedy of friendship and human nature * Independent * Wonderfully fresh and funny, and among examples of Victorian humour I would place it high in the pantheon, right up there with The Importance of Being Earnest and The Diary of a Nobody...Jerome's writing...triumphantly stands the test of time, with its comic flights of exaggeration, its occasional archness, and its entirely innocent hint of the camp * Daily Telegraph *

Jerome Klapka Jerome was born in Walsall on 2 May 1859 and brought up in East London. After his father died, Jerome left school at fourteen and worked as a railway clerk, actor, journalist and teacher. In 1885 he published On the Stage - and Off which was followed in 1886 by Idle Thoughts of an Idle Fellow. In 1888 Jerome married Georgina Stanley and a year later he published his most famous work, Three Men in a Boat. The sequel, Three Men on the Bummel, appeared in 1900. Jerome also wrote several other novels, plays, stories and autobiographical writings, edited The Idler and Today magazines and, during the First World War, worked for the French ambulance service. Jerome K. Jerome died on 14 June 1927.