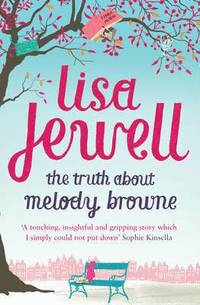 The Truth About Melody Browne

av Lisa Jewell
Häftad Engelska, 2010-01-07
119
Köp
Spara som favorit
Skickas inom 5-8 vardagar.
Fri frakt inom Sverige för privatpersoner.
Finns även som
Visa alla 1 format & utgåvor
Melody Browne can remember nothing before her ninth birthday. Now in her early thirties, Melody lives in the middle of London with her seventeen-year-old son. She hasn't seen her parents since she left home at fifteen, but Melody doesn't mind. She's better off on her own. And then fragments of her past start to come back. At first her memories mean nothing to her but slowly, day by day, she begins to piece together the real story of her childhood. But with every mystery she solves another one materialises, with every question she answers another appears. And Melody begins to wonder if she'll ever know the truth about her past ...
Visa hela texten

"For anyone who hasn't picked up a Lisa Jewell novel since her chick-lit classic Ralph's Party, it might be time for a re-acquaintance ... Jewell's writing proves as punchy and fresh as ever. Her lively depiction of inner-city London living and dating still rings true" Independent "Lisa Jewell's writing is like a big warm hug and this book is a touching, insightful and gripping story which I simply couldn't put down" -- Sophie Kinsella "Lisa's best book yet. I loved it" -- Jane Fallon "The Truth about Melody Browne perfectly illustrates the truth about Lisa Jewell. She writes like a dream, creates characters that you really care about and tells a story so compelling that it will still be with you long after you've read the last page" -- Mike Gayle "Classic storytelling" Elle

Lisa Jewell was born in London. Her first novel, Ralph's Party, was published in 1999. It was the best-selling debut novel of the year. Since then she has published another sixteen novels, most recently a number of dark psychological thrillers, including The Girls and Then She Was Gone (both of which were Richard & Judy Book Club picks). Lisa is a top ten New York Times and number one Sunday Times author who has been published worldwide in over twenty-five languages. She lives in north London with her husband, two daughters, two cats, two guinea pigs and the best dog in the world.