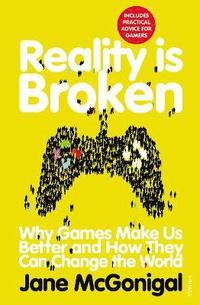 av Jane McGonigal
(2 röster)
Häftad Engelska, 2012-04-05
141
Köp
Spara som favorit
Finns även som
Visa alla 1 format & utgåvor
We are living in a world full of games. More than 31 million people in the UK are gamers. The average young person will spend 10,000 hours gaming by the age of twenty-one. The future belongs to those who play games. In this ground-breaking book, visionary game designer Jane McGonigaI challenges conventional thinking and shows that games - far from being simply escapist entertainment - have the potential not only to radically improve our own lives but to change the world.
Visa hela texten

Inspiring and engaging * Daily Telegraph * An intriguing and thought-provoking book * New Statesman * Despite her expertise, McGonigal's book is never overly technical, and as with a good computer game, anyone, regardless of gaming experience, is likely to get sucked in * New Scientist * McGonigal is persuasive and precise in explaining how games can transform our approach to those things we know we should do. McGonigal is also adept at showing how good games expose the alarming insubstantiality of much everyday experience. McGonigal is a passionate advocate... Given the power and the darker potentials of the tools she describes, we must hope that the world is listening -- Tom Chatfield * Observer * McGonigal brilliantly deconstructs the components of good game design before parlaying them into a recipe for changing the offline, 'real' world' * Literary Review *

Jane McGonigal is a world-renowned designer of alternate reality games - or, games that are designed to improve real lives and solve real problems. She is a two-time New York Times bestselling author of Reality is Broken and SuperBetter. Her TED talks have had more than 15 million views. Jane is also a future forecaster. She is the Director of Games Research & Development at the Institute for the Future, a non-profit research group. Her future forecast work has been featured in The Economist, Vanity Fair, The New Yorker, O Magazine, Fast Company, The New York Times Science section, and more. She teaches a course on 'How to Think Like a Futurist' at Stanford University, and has taught game design and theory at UC Berkeley and the San Francisco Art Institute. She enjoys speaking to global audiences. A former New Yorker she now lives in San Francisco.