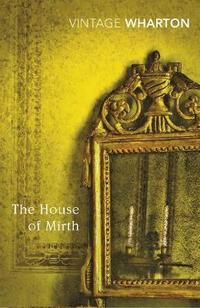 The House of Mirth

av Edith Wharton
Häftad Engelska, 2011-03-03
89
Köp
Spara som favorit
Skickas inom 5-8 vardagar.
Fri frakt inom Sverige för privatpersoner.
Finns även som
Visa alla 8 format & utgåvor
Lily Bart has no fortune, but she possesses everything else she needs to make an excellent marriage: beauty, intelligence, a love of luxury and an elegant skill in negotiating the hidden traps and false friends of New York's high society. But time and again Lily cannot bring herself to make the final decisive move: to abandon her sense of self and a chance of love for the final soulless leap into a mercenary union. Her time is running out, and degradation awaits. Edith Wharton's masterful novel is a tragedy of money, morality and missed opportunity.
Visa hela texten

Edith Wharton's 1905 novel gave literature one of its most complicated tragic heroines * Independent * [Edith Wharton was] an ambitious, brilliant and industrious woman who created "her own personal and professional revolution" * Sunday Times * Like Henry James, Wharton has a wonderful gift of revealing the inner life of her characters while also documenting the elegance and hypocrisy of high society...the accumulation of desolation in the final three chapters reduces me to tears -- Jonathan Bate * Sunday Telegraph * A cautionary tale of social disaster, told with wit and elan * Independent * Edith Wharton was a natural story-teller. As plots do in real life, hers flow directly from character. Her prose is so effortlessly elegant that you're rarely aware as they purl by that the sentences are so pretty...I was born after the heavy spade work of female emancipation was done. But 100 years ago, Edith Wharton's drive, independence, wilfulness and autodidactic mastery of the English language were extraordinary, and I bashfully claim her as a kindred spirit -- Lionel Shriver * Guardian *

Bloggat om The House of Mirth

Edith Wharton was born on 24 January 1862 in New York. She was educated in both America and Europe. In 1885 she married Edward Robbins Wharton. In 1899 she published her first work, a collection of stories called The Greater Inclination. In 1900 she published her first novel, The Touchstone. She wrote many other works including travel writing, home decoration manuals, short stories and her famous novels The House of Mirth (1905), Ethan Frome (1911), The Custom of the Country (1913) and The Age of Innocence (1920). She lived in France from 1907. She was made a Chevalier of the Legion of Honor in 1916 for her work helping refugees there during the war. Edith Wharton died on 11 August 1937.