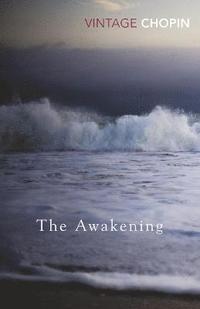 av Kate Chopin
Häftad Engelska, 2011-03-03
98
Köp
Spara som favorit
Finns även som
Visa alla 8 format & utgåvor
The Pontellier family are spending a hot, lazy holiday on the Gulf of Mexico. No-one expects that Edna Pontellier should be preoccupied with anything more than her husband and children. When an illicit summer romance awakens new ideas and longings in Edna, she can barely understand herself, and cannot hope for aid or acceptance in the stifling attitudes of Louisiana society. Kate Chopin's compelling, candid portrait of a woman attempting to break free caused an outcry when first published in 1899.
Visa hela texten

The novel expresses women's diffuse desire for personal and social change * Guardian * Chopin's slight, brittle and fierce novel became a classic and a cult, shocking readers with its candid and unsentimental portrait of marital infidelity. Though the subject has lost its power to outrage, the novel has not, it remains delicately bitter and acidly angry * Observer * The Awakening is indeed a remarkable achievement, not least because of its rhapsodic ending * Independent * Chopin cuts closer to the core of her heroine's feelings... The great power of The Awakening resides not in the answers it provides, but in the questions it exposes * Washington Post * It doesn't seem so daring now, but it's an inspiring model of personal crusading. Written in lyrical, restrained prose, this is not only a historical document of writer ahead of her time, but an enduringly good read. * Scotsman *

Kate Chopin was born in St Louis, Missouri on 8 Feb 1850. Born Katherine O'Flaherty, she grew up in a predominantly female household after her father died when she was just four years old. Her father was an Irish immigrant, and her mother was French Creole. In 1870 she married Oscar Chopin, a local cotton trader, and together they had six children. In 1882 Oscar died from swamp fever, leaving Kate a widow with a large family to support, and the heir to his sizeable debts. She turned to writing in order to support her young family, publishing her first short story in 1889. A number of her works were subsequently published in literary magazines and popular American periodicals, including Vogue. Chopin published only two novels in her lifetime: At Fault and The Awakening. The Awakening, published in 1899, was largely condemned as vulgar and immoral by critics of the time. Dismayed by such a harsh reception, Chopin cut short her brief career as a novelist, and for the remainder of her life focused solely on writing short stories, poetry and reviews. Kate Chopin died on 22 August 1904 from a brain haemorrhage.