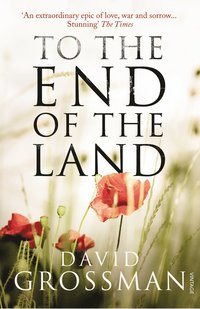 To The End of the Land

av David Grossman
Häftad Engelska, 2011-09-01
108
Köp
Spara som favorit
Skickas inom 5-8 vardagar.
Gratis frakt inom Sverige över 159 kr för privatpersoner.
Finns även som
Visa alla 2 format & utgåvor
Ora, a middle-aged Israeli mother, is about to celebrate her son Ofer's release from army service when he returns to the front for a major offensive. Instead of waiting at home for the 'notifiers' who could arrive at any moment to tell her of her son's fate, she sets off for a hike in Galilee, leaving no forwarding address. If a mother is not there to receive the news, a son cannot die, can he? Recently estranged from her husband, Ora drags along an unlikely companion: their former best friend and her former lover Avram, the man who in fact turns out to be her son's biological father. As they sleep out in the hills, ford rivers and cross valleys, Ora recounts, step by step and word by word, the story of her son's birth, life and possible death, in one mother's magical, passionate and heartbreaking attempt to keep her son safe from harm.
Visa hela texten

Extraordinary, impassioned... To the End of the Land is without question one of the most powerful and moving novels I have ever read -- Jacqueline Rose * Guardian * It is tricky to set out the scale of Grossman's achievement without resorting to reviewers' cliches. He has aimed as high as it is possible to do in a novel which deals with the great questions of love, intimacy, war, memory and fear of personal and national annihilation-and has overwhelmingly achieved everything. -- Linda Grant * Independent * This is a great novel, a rare example of a book that lives up to its billing, its emotional depth and humanity balanced by formidable formal control and pacing of the chronological sequence, the text rendered into an English that mostly finds the cadence and associative range of the original Hebrew... To The End Of The Land is, quite literally, unforgettable -- Brian Morton * Sunday Herald * This is a book of overwhelming power and intensity, David Grossman's masterpiece. Flaubert created his Emma, Tolstoy made his Anna, and now we have Grossman's Ora - as fully alive, as fully embodied, as any character in recent fiction. I devoured this long novel in a feverish trance. Wrenching, beautiful, unforgettable -- Paul Auster There are some writers in whose words one recognizes the texture of life. David Grossman is such a writer. He is a master of the emotionally accurate and significant. His characters don't so much lie on the page as rise before the reader's eyes, in three dimensions, their skin covered in prose that both stabs with insight and shines with compassion -- Yann Martel

David Grossman is the bestselling author of numerous works, which have been translated into thirty-six languages. His most recent novel, A Horse Walks into a Bar, was awarded the International Man Booker Prize 2017, and shortlisted for the TLS-Risa Domb/Porjes Prize 2019. Grossman is also the recipient of the French Chevalier de l'Ordre des Arts et des Lettres and the 2010 Frankfurt Peace Prize.