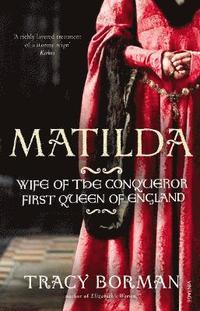 Wife of the Conqueror, First Queen of England

av Tracy Borman
(1 röst)
Häftad Engelska, 2012-09-06
149
Köp
Spara som favorit
Skickas inom 3-6 vardagar.
Fri frakt inom Sverige för privatpersoner.
Finns även som
Visa alla 1 format & utgåvor
Read the thrilling, tempestuous story of the 'first' Queen of England. Matilda, wife of William the Conqueror, was the first woman to be crowned Queen of England and formally recognised as such by her subjects. Beyond this, however, little is known of her. No contemporary images of her remain, and the chroniclers of her age left us only the faintest clues as to her life. Who was this spectral queen? In this first major biography, Tracy Borman sifts through the evidence to uncover an extraordinary story. Matilda was loving and pious, possessed strength, ambition and intelligence, and was fiercely independent. All of these attributes gave her unparalleled influence over William. Although Matilda would provide an inspiring template for future indomitable queens, these qualities also led to treachery, revolt and the fracturing of a dynasty. Matilda: Wife of the Conqueror, First Queen of England takes us from the courts of Flanders to the opulence of royal life in England. Alive with intrigue, rumour and betrayal, it illuminates for the first time the life of an exceptional, brave and complex queen pivotal to the history of England.
Visa hela texten

Borman has expertly forged an absorbing biography from fragments of her personal history * Independent * Borman moves deftly between the difficult written sources... The often scanty details of Matilda's life are given more rounded form by viewing them in context * History Today * A richly layered treatment of a stormy reign * Kirkus * Borman shows that Matilda was a capable regent and political operator... Matilda remains relevant: one legacy is her bloodline, which still rules in Britain today * Sunday Times * Tracy Borman tells this story with a steady eye and a steady hand, tracing what can be known of Matilda's part in the events that were to change the course of English history -- Helen Castor * Literary Review *

Tracy Borman studied and taught history at the University of Hull and was awarded a PhD in 1997. She went on to a successful career in heritage and has worked for a range of historic properties and national heritage organisations, including the National Archives and English Heritage. She is now Chief Executive of the Heritage Education Trust and also works part-time for Historic Royal Palaces. Tracy has regularly appeared on television and radio, and has featured in a range of magazine and newspaper articles. She is a regular contributor to history magazines, including articles in BBC History Magazine on the history of beauty and eighteenth-century 'It' Girls'. In addition, she also gives public talks and lectures on a wide range of subjects.