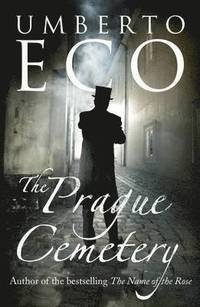 av Umberto Eco
Häftad Engelska, 2012-07-01
102
Köp
Spara som favorit
Finns även som
Visa alla 5 format & utgåvor
Nineteenth-century Europe abounds with conspiracy both ghastly and mysterious. Jesuits plot against Freemasons. Italian priests are strangled with their own intestines. French criminals plan bombings by day and celebrate black masses by night. Every nation has its own secret service, perpetrating forgeries, plots, and massacres. But what if, behind all of these conspiracies, lay just one man?
Visa hela texten

"An extremely readable narrative of betrayal, terrorism, murder...chilling" * Daily Telegraph * "A smartly entertaining fin-de-siecle romp" * Independent * "Imagine Dan Brown adorned with a PhD: that's Umberto Eco" * Observer * "This feels like Eco's most accessible novel since The Name of the Rose, a temptingly complex tale of 19th-century plots and conspiracies, and of an evil genius who may be behind them all" * Sunday Times * "The Prague Cemetery, snakes along an underground trail that twists through the enlightened heresies and bigoted gospels respectively propagated by Freemasons and Illuminati, Jesuits and Jew-baiters, before hinting at an ideological conspiracy that underlines the deceits of contemporary politics" * Observer *

Umberto Eco (1932-2016) wrote fiction, literary criticism and philosophy. His first novel, The Name of the Rose, was a major international bestseller. His other works include Foucault's Pendulum, The Island of the Day Before, Baudolino, The Mysterious Flame of Queen Loana, The Prague Cemetery and Numero Zero along with many brilliant collections of essays.