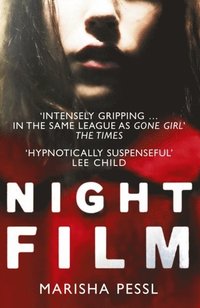 av Marisha Pessl
(1 röst)
Häftad Engelska, 2014-01-30
110
Köp
Spara som favorit
Finns även som
Visa alla 3 format & utgåvor
'THE BOOK EVERYONE'S TALKING ABOUT.' Observer On a damp October night the body of beautiful Ashley Cordova is discovered in a Manhattan warehouse. Though her death is ruled a suicide, investigative journalist Scott McGrath suspects otherwise. The last time McGrath got too close to the Cordova dynasty, he lost his marriage and his career. This time he could lose his mind.
Visa hela texten

Deliciously spine-tingling... all-consuming and mind-altering. Nothing else matters while there are pages to turn and, once the book is over, the world seems an emptier place. * Daily Telegraph * This month's smartest (and creepiest) new novel is a hell of a read . . . An intensely writerly project that doesn't jettison the reader . . . It explores how stories seep from texts into the world; not only in that it follows a journalist investigating a cult horror-film director whose life is entangled in his fictions, but also because the pages are peppered with fake news article and websites. A narrative signifying narratives, this novel echoes . . . The action bullet-trains through an artfully plotted world of secret screenings and suspicious deaths. * GQ (Book of the Month) * Night Film, the gorgeously written, spellbinding new novel by the dazzlingly inventive Marisha Pessl, will hold you in suspense until you turn the final page. * Stylist * When Cordova's beautiful daughter is found dead in a warehouse, McGrath can't help but pick up the trail. His pacy narrative voice is interrupted by magazine interviews, text messages, Facebook pages; a Cordova fan forum even pops up on the printed page . . . The result is multiple narratives that read like real life (or a more exciting version of it) . . . Night Film doesn't cease to be with its last full stop. [Pessl] has developed a phone app and a website with extra material - a savvy move. * Vogue * The real and the imaginary, life and art, are dizzyingly distorted not only in a Cordova night film - which a fictional Time article calls "a spellbinding and emotionally harrowing experience" - but in Pessl's own Night Film as well. McGrath's prologue opens with a dictum "Everyone has a Cordova story, whether they like it or not." This book is ours. * Vanity Fair *

Marisha Pessl was born in Michigan in 1977, and now lives in New York. Her previous and debut novel, Special Topics in Calamity Physics, was published to rave reviews and established her as one of the most astute and exciting novelists writing today.