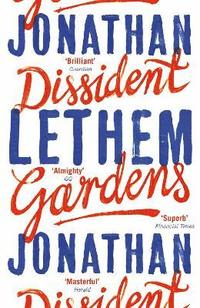 av Jonathan Lethem
(1 röst)
Häftad Engelska, 2015-01-15
169
Köp
Spara som favorit
Kan tyvärr inte längre levereras innan julafton.
Finns även som
Visa alla 2 format & utgåvor
Longlisted for the 2015 Folio Prize Longlisted for the 2015 IMPAC Dublin Literary Award In 1955, Rose Zimmer got screwed. It wasn't the first time, and it wasn't the last. In fact, Rose - like all American Communists - got screwed by the entire twentieth century. She doesn't take it lying down. For over forty years she pounds the streets of Sunnyside Gardens, Queens, terrorising the neighbourhood, and her family, with the implacability of her beliefs, the sheer force of her grudge. And the generations that follow Rose will not easily escape her influence, her ire, her radicalism. Foremost among these is Miriam, Rose's charismatic and passionate want-away hippie daughter, who heads for the Greenwich Village of the Sixties; her black stepson Cicero, an angry debunking machine; and her bewildered grandson Sergius, who finds himself an orphan in the capitalist now. A radical family epic, and an alternative view of the American twentieth century, Dissident Gardens is the story of a group of individuals who fought and lost, but might one day win. It is a blast of pure style and literary dazzle from one of the great and most innovative writers of the age.
Visa hela texten

The cast makes for a heady, swirly mix of fascinating, lonely people. Lethem's writing, as always, packs a witty punch. The epoch each character inhabits is artfully etched and the book is as illuminating of 20th-century American history as it is of the human burden of overcoming alienation. * Publisher's Weekly * Lethem is breathtaking in this torrent of potent voices, searing ironies, popculture allusions, and tragicomic complexities. He shreds the folk scene, eviscerates quiz shows...and offers unusual perspectives on societal debacles and tragic injustices. A righteous, stupendously involving novel about the personal toll of failed political movements and the perplexing obstacles to doing good. * Booklist (starred review) * Lethem has written a brilliant, funny, compendious novel at whose heart lies a sharp, slim blade of thought and style. -- Rachel Cusk * Guardian * Superb... Dissident Gardens can be placed squarely in the canon of the great American social novel. -- Ayana Mathis * Financial Times * This epic family novel criss-crosses generations from the Fifties to the present day. * Tatler *

Jonathan Lethem is the New York Times-bestselling author of nine novels, including Dissident Gardens, The Fortress of Solitude and Motherless Brooklyn. A recipient of the MacArthur Fellowship and winner of the National Book Critics Circle Award, Lethem has also published his stories and essays in the New Yorker, Harper's, Rolling Stone, Esquire and the New York Times, among others.