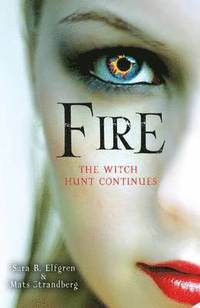 av Mats Strandberg, Sara B Elfgren
(1 röst)
Häftad Engelska, 2013-06-20
139
Köp
Spara som favorit
Skickas inom 5-8 vardagar.
Gratis frakt inom Sverige över 159 kr för privatpersoner.
Finns även som
Visa alla 2 format & utgåvor
THE CHOSEN ONES are about to start their second year in senior high school. The whole summer break they have held their breaths waiting for the demons' next move. But the threat shows up from another direction, somewhere they could never have foreseen. It becomes more and more obvious that something is very, very wrong in Engelsfors. The past is woven together with the present. The living meet the dead. THE CHOSEN ONES are tied even closer together and are once again reminded that magic cannot ease unhappy love or mend broken hearts...
Visa hela texten

Sara B. Elfgren started her career in the film industry as a screenwriter. As a script doctor, she has been involved in several Swedish film and TV-productions. She has a Master's Degree in Film Studies. Mats Strandberg is journalist and a regular columnist for Sweden's biggest evening newspaper Aftonbladet. The organization Sveriges Tidskrifter (Sweden's Newspapers and Magazines) awarded him the title Columnist of the Year in 2004. In 2008, Sara B. Elfgren met Mats Strandberg. They quickly realized that they shared a passion for supernatural stories about young adults. Soon the idea to write together was born. In August 2009 they began working on their The Engelsfors Trilogy - The Circle and its two sequels, Fire and The Key. Translated by Anna Paterson