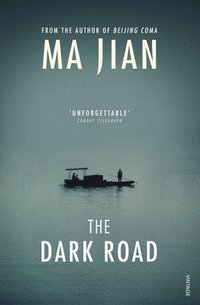 av Ma Jian
Häftad Engelska, 2014-04-24
129
Köp
Spara som favorit
Skickas inom 7-10 vardagar.
Fri frakt inom Sverige över 159 kr för privatpersoner.
Kan levereras innan jul!
Finns även som
Visa alla 2 format & utgåvor
Meili, a young peasant woman born in the remote heart of China, is married to Kongzi, a village school teacher, and a distant descendant of Confucius. They have a daughter, but desperate for a son to carry on his illustrious family line, Kongzi gets Meili pregnant again without waiting for official permission. When family planning officers storm the village to arrest violators of the population control policy, mother, father and daughter escape to the Yangtze River and begin a fugitive life. For years they drift south through the poisoned waterways and ruined landscapes of China, picking up work as they go along, scavenging for necessities and flying from police detection. As Meili's body continues to be invaded by her husband and assaulted by the state, she fights to regain control of her fate and that of her unborn child.
Visa hela texten

One of China's most prominent dissident voices addresses the bleak effects of the one-child policy in this striking novel, in which the brutality of social engineering is made graphically plain. Ma Jian's work is banned in China; this unflinching portrait of one woman's struggle against oppression makes it sadly easy to understand why * New Statesman * A writer of rare orgininality... All of Ma's skill and playfulness are on display as the novel builds to a climax in which Meili is forced to question her very right to exist in this fragile, ever-changing new world -- Tash Aw * Guardian * [Ma Jian's] characterization is superb... A devastating critique of China's oppressive communist regime * Mail on Sunday * The Dark Road follows the river-borne escape of fugitives from the one-child policy. An ill-matched couple's flight along anarchic backwaters leads them into a raw, brutal, brilliantly depicted boom-time underworld -- Boyd Tonkin * Independent * Unforgettable -- Stephen Abell * Sunday Telegraph *

Ma Jian was born in Qingdao, China. He is the author of seven novels, a travel memoir, three story collections and two essay collections. He has been translated into twenty-six languages. Since the publication of his first book in 1987, all his work has been banned in China. He now lives in exile in London