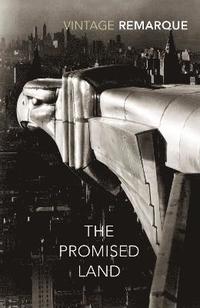 av Erich Maria Remarque
Häftad Engelska, 2017-12-07
112
Köp
Spara som favorit
Finns även som
Visa alla 1 format & utgåvor
The final, previously unpublished novel by the author of All Quiet on the Western Front - a dreamlike, powerfully moving account of an emigrant's experience of New York during World War II. From the detention centre on Ellis Island, Ludwig Somner looks across a small stretch of water to the glittering towers of New York, which whisper seductively of freedom after so many years of wandering through a perlious, suffering Europe. Remarque's final novel, left unfinished at his death, tells of the precarious life of the refugee - life lived in hotel lobbies, on false passports, the strange, ill-assorted refugee community held together by an unspeakable past. For Somner, each new luxury - ice cream served in drugstores, bright shop windows, art, a new suit, a new romance - has a bittersweet edge. Memories of war and inhumanity continue to resurface even in this peaceful promised land.
Visa hela texten

Remarque died before he could complete The Promised Land, but the four hundred pages he produced, superbly translated by the redoubtable Michael Hofmann, are enough to tell a fascinating and poignant tale about identity, adaptability and the trials of starting afresh -- Malcolm Forbes * Herald * The Promised Land has been both beautifully penned and thoughtfully translated... The Promised Land is a compulsively readable, and rather marvellous historical novel -- Kirsty Hewitt * Nudge * Remarque is a craftsman of unquestionably first rank * New York Times Book Review * A moving and compelling story...thoughtful reflection on the inhumanity of warfare and the emigrant's predicament, deft characterisation, colourful accounts of life in New York during World War II...readers will readily engage with the rich detail and sympathetic portrayal * New Books in German *

Erich Maria Remarque was born in 1899. He fought and was injured in the trenches in the First World War when he was eighteen years old. He was exiled and his works were burnt by the Nazis. He lived in America and Switzerland and married and divorced his first wife twice before marrying the celebrated Hollywood actress Paulette Goddard. He published several novels after All Quiet on the Western Front, the most famous of which is The Road Back. He died in 1970.