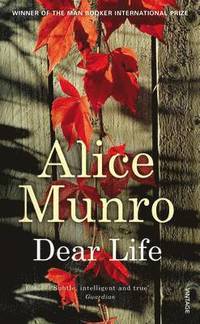 av Alice Munro
(24 röster)  |  Läs 5 recensioner
Häftad Engelska, 2013-07-30
89
Köp
Spara som favorit
Finns även som
Visa alla 4 format & utgåvor
Alice Munro captures the essence of life in her brilliant new collection of stories. Moments of change, chance encounters, the twist of fate that leads a person to a new way of thinking or being: the stories in Dear Life build to form a radiant, indelible portrait of just how dangerous and strange ordinary life can be.
Visa hela texten

"Deep and surprising and unsparing" -- Helen Simpson * Guardian * "As rich and astonishing as anything she has ever done before" * New York Review of Books * "In this book Munro has laid bare the foundations of her fiction as never before. Lovers of her writing must hope this is not, in fact, her finale. But if it is, it's spectacular" -- Ruth Scurr * Daily Telegraph * "Another dazzling collection of short stories, provincial and universal in equal measure" -- Sara Wheeler * Observer * "A slight sense of withholding gives Munro's prose its gracefulness, and allows intimacy without danger. After many years, many collections and many wonderful stories, readers may feel they know everything about Alice Munro, especially as so many of her characters lead lives similar to her own. In fact, we know very little about her. This is one of the reasons readers become dizzy with love for Munro. This other reason is that she is so damn good" -- Anne Enright * Guardian *

Alice Munro was born in 1931 and is the author of twelve collections of stories, most recently Too Much Happiness, and a novel, Lives of Girls and Women. She has received many awards and prizes, including three of Canada's Governor General's Literary Awards and two Giller Prizes, the Rea Award for the Short Story, the Lannan Literary Award, the WHSmith Book Award in the UK, the National Book Critics Circle Award in the US, was shortlisted for the Booker Prize for The Beggar Maid, and has been awarded the Man Booker International Prize 2009 for her overall contribution to fiction on the world stage. Her stories have appeared in The New Yorker, Atlantic Monthly, Paris Review and other publications, and her collections have been translated into thirteen languages. She lives with her husband in Clinton, Ontario, near Lake Huron in Canada.