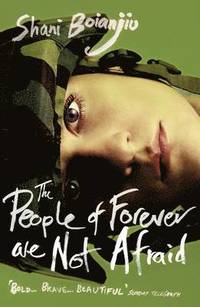 The People of Forever are not Afraid

av Shani Boianjiu
Häftad Engelska, 2014-05-01
149
Köp
Spara som favorit
Skickas inom 5-8 vardagar.
Fri frakt inom Sverige över 159 kr för privatpersoner.
Beställ boken senast måndag 14 december kl. 12:45 för leverans innan julafton
Finns även som
Visa alla 2 format & utgåvor
Longlisted for the Women's Prize for Fiction Yael, Avishag and Lea grow up together in a tiny, dusty village in Israel. They attend high school, gossip about boys, and try to find ways to alleviate the universal boredom of teenage life. Then at eighteen they are conscripted into the army. Yael trains marksmen, Avishag stands guard watching refugees throw themselves at barbed-wire fences and Lea, posted at a checkpoint, imagines the stories behind the familiar faces that pass by her day after day. All of them live in that single intense second before danger erupts, all of them trying to survive however they can... Shortlisted for The Jewish Quarterly Wingate Prize
Visa hela texten

[Boianjiu's] voice is distinct. It's confident, raw, amusing - a lot like her women * New York Times * This unflinching debut novel depicts with depth and acuity the disorientating effects of fear on young minds... The girls are often lost for words, but the author successfully finds a voice to express the dehumanising horror of warfare in this fragmented plot held together with a passionate, poetic eloquence -- Anita Sethi * Observer * A memorably bold novel... Somewhere between the sardonic humour of Etgar Keret and the epic storytelling of David Grossman, Boianjiu has created a brave, beautiful, political literature that is entirely her own -- Catherine Taylor * Sunday Telegraph * In a humorous and beguiling deadpan, Boianjiu conveys the fleeting, vanishing experience of hovering between adolescence and adulthood, at the same time as providing a rare portrait of young Israelis being minced through military service -- Robert Collins * Sunday Times * A searing novel -- Catherine Taylor * Guardian *

Shani Boianjiu was born in 1987 in Jerusalem, and she served in the Israeli Defense Forces for two years. Her fiction has been published in Vice magazine, Zoetrope and the New Yorker. Shani is the youngest recipient ever of the US National Book Foundation's 5 under 35 Award. She lives in Israel. This is her first novel.