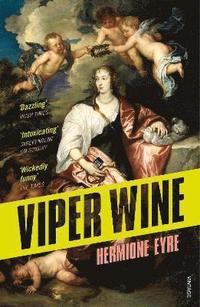 Exuberantly inventive and intelligent... Sumptuous, strange and startlingly original. * Mail on Sunday * An intoxicating fantasy in which real-life characters are haunted by the future. -- Marcus Field * Independent on Sunday * Using an alchemy all of her own, Eyre's postmodern take on the 17th century renders it dazzlingly fresh and contemporary. -- Lucy Scholes * Observer * Playful, witty and expansive... An exceptionally clever and exhilarating excursion through Caroline high society. -- Nick Rennison * Sunday Times * A genre-defying debut novel... Vivid and vivacious - hats off to Eyre. -- Sebastian Shakespeare * Tatler * Bold and wildly original, Viper Wine is an exuberantly witty play on the vanity and ghoulishness of the beauty industry, and a celebration of the unfading beauty of language... Hermione Eyre has injected new youth into the historical novel. -- Frances Wilson * Evening Standard * Hermione Eyre's bold and satisfying debut...offers up a potent mixture of baroque intricacy and gothic horror. Like Laurent Binet's HHhH... Viper Wine tries to tease out the tensions that exist when telling history as fiction. Eyre's novel is stylistically a world away from Binet's, but shows some of the same playfulness in its reworking of historical sources... The stylistic brio and technical invention on show here is truly impressive... -- John Gallagher * Sunday Telegraph * A wickedly funny parable of today's beauty industry... Descriptive brilliance and breathtaking cleverness. -- Melissa Katsoulis * The Times * No account of [Van Dyck] has perhaps been so convincing as that in Viper Wine... As art history it's deeply unorthodox - but as a postmodern portrait of a trend-setting painter in the midst of a comeback, it seems both thrillingly and entertainingly right. -- Marcus Field * Independent on Sunday * Almost 400 years after Venetia Stanley's death, little has changed. As an allegory of our ageing-obsessed generation, [Viper Wine] is hard to argue with. -- Sam Baker * Harper's Bazaar * Eyre has written a sumptuous, sensual tale of beauty and vanity; it's crying out for a TV adaptation. * Bookseller * Magical realism meets a seventeenth-century Portrait of a Marriage. To say it is dazzling would be a puritan understatement. -- Tom Holland, author of 'Rubicon' and 'Persian Fire' Persistently bizarre, fecund, technically inventive, funny - and oddly touching. -- Jonathan Meades Viper Wine richly evokes Elizabethan and Jacobean language and is alert to the plight of Catholics under Elizabeth I and King James, while at the same time putting a post-modernist spin on the tight and enthralling plot. I used to be dubious about alchemy and antiquarianism, but the wit and excitement of this first novel breathes new life into them. -- Tom Paulin [A] cornucopia of a novel. -- Kathy Stevenson * Daily Mail * As funny as it is surreal. -- India Ross * Financial Times * This funny and exciting novel takes a fresh look at life during the excitement and danger of the 17th century. * Catholic Herald * The language is beautiful, creating fantastic images with her descriptions. -- Claire Snook * Bookmunch * Eyre's prose is sensuous and rich... Her recreation of the period is persuasive and alluring. -- Andrew Tong * Independent on Sunday * A pacy, cleverly postmodern historical novel... Viper Wine is a high-flying, high-concept mix that stylishly transmutes its wildly disparate elements into an assured, flamboyant gem. -- Tina Jackson * Metro * A mad, psychedelic romp through some of history's most fertile ground... The author's voracious enthusiasm for eclectic, highly-researched detail is persistently entertaining, breathing new life into the genre of the historical novel. A real tonic. -- Matilda Bathurst * Country Life * Clever, lively and playful... [An] impressive first novel. -- Clarissa Burden * Tablet * A dazzling debut... Wickedly funny. * ELLE Decoration * This dazzling firework of a debut novel is a reminder of how inventive and ori

Hermione Eyre is a journalist and former croupier. She read English at Hertford College, Oxford and was a staff writer and TV critic at the Independent on Sunday for seven years, then chief interviewer at the London Evening Standard Magazine. This is her first novel.