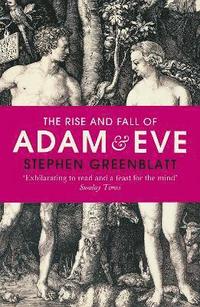 The Rise and Fall of Adam and Eve

The Story that Created Us

av Stephen Greenblatt
Häftad Engelska, 2018-12-06
135
Köp
Spara som favorit
Finns även som
Visa alla 1 format & utgåvor
Selected as a book of the year 2017 by The Times and Sunday Times What is it about Adam and Eve's story that fascinates us? What does it tell us about how our species lives, dies, works or has sex? The mythic tale of Adam and Eve has shaped conceptions of human origins and destiny for centuries. Stemming from a few verses in an ancient book, it became not just the foundation of three major world faiths, but has evolved through art, philosophy and science to serve as the mirror in which we seem to glimpse the whole, long history of our fears and desires. In a quest that begins at the dawn of time, Stephen Greenblatt takes us from ancient Babylonia to the forests of east Africa. We meet evolutionary biologists and fossilised ancestors; we grapple with morality and marriage in Milton's Paradise Lost; and we decide if the Fall is the unvarnished truth or fictional allegory.
Visa hela texten

A compelling, all-encompassing story of myth, theology and belief ... He delves deftly and lucidly into theology... Fascinating -- Sam Leith * Spectator * Thrilling ... a study of western disenchantment, of intellectual progress, of the fading powers of the myths of a simpler age. But it is a more complex study than that. It is also an ode to human creativity and to the powerful grip of narrative -- Tim Whitmarsh * Guardian * Fascinating -- Christina Borg * Sunday Times * Enthralling, thrilling... Along the way, there is an often hilarious account of scholastic efforts to rationalise the myth's illogic, and an array of entertaining heresies... What gives Greenblatt's "intellectual adventure" its tension and excitement is a sense of his own divided loyalties -- Peter Conrad * Observer * Erudite, wide-ranging, thought-provoking and elegantly fashioned -- Darragh McManus * Irish Independent * Greenblatt, on excellent form here, visits familiar destinations ... with fresh eyes, and opens up new interpretative vistas ... Hefty themes are covered in this spellbinding book, but the learning is worn lightly. -- Jonathan Wright * BBC History magazine * This is a learned book, but Greenblatt's passion for story-telling makes it read like a series of fascinating anecdotes... The Rise and Fall of Adam and Eve is exhilarating to read and a feast for the mind -- John Carey * Sunday Times * Greenblatt is utterly engaging. -- Miri Rubin * Prospect * Greenblatt's inexhaustible curiosity goes without saying; what makes this book a wonder is its passion ... nothing less than a love story, a hymn. Who would have thought scholarship could be so ardent or so poignant? -- Howard Jacobson, winner of the MAN Booker Prize Pellucid, absorbing and for many contemporary readers surely definitive account -- John Gray * New Statesman *

Stephen Greenblatt is Cogan University Professor of the Humanities at Harvard University. He is the author of twelve books, including The Swerve: How the World Became Modern, which won the National Book Award and a Pulitzer Prize, as well as the New York Times bestseller Will in the World: How Shakespeare Became Shakespeare and the classic university text Renaissance Self-Fashioning. He is General Editor of The Norton Anthology of English Literature and of The Norton Shakespeare, and has edited seven collections of literary criticism.