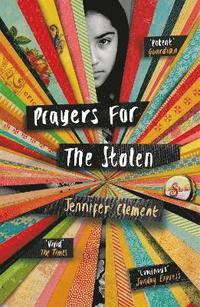 Prayers for the Stolen

av Jennifer Clement
(5 röster)
Häftad Engelska, 2015-02-05
113
Köp
Spara som favorit
Finns även som
Visa alla 2 format & utgåvor
'Now we make you ugly,' my mother said. 'The best thing you can be in Mexico is an ugly girl.' On the mountainside in rural Mexico where Ladydi lives, being a girl is dangerous. Especially a pretty one. If the Narcos hear there is a pretty girl on the mountain, they steal her. So when the black SUVs roll into town, Ladydi and her friends hide in the warren of holes scattered across the mountain, safely out of sight. Because the stolen girls don't come back. Ladydi is determined to get out, to find a life that offers more than just the struggle to survive. But she soon finds that the drug cartels have eyes everywhere, and the cities are no safer than the mountains.
Visa hela texten

The theme of Prayers for the Stolen is the wanton violence inflicted on women and the destruction of communities as a result of the drug trade in Mexico, but Clement's eye for the revealing detail, the simple poetry of her language and the visceral authenticity of her characters turn that deadening reality into a compelling, tragically beautiful novel -- Yann Martel A moving novel narrated by an open-hearted teenage girl growing up in the borderlands of Mexico controlled entirely by the drug cartels. Lyrical, disturbing and not without optimism, this work deserved far more acclaim when published last year -- Kazuo Ishiguro * New Statesman * Prayers For The Stolen is stark and brutal, but not without happiness. "Mexico is a warren of hidden women", says Jennifer Clement. This book is a way of seeing them * Stylist * Every sentence in Prayers for the Stolen is direct, potent, unexpected; twisting on the page like a knife in the gut... This work also gives us all of a novel's pleasures - a story laden with significance and drama and meaning, a keen feeling of relationship between reader and characters, a fully realised world through which we may roam -- Kirsty Gunn * Guardian * [Clement] shows the black comedy in the details and the emergency in the broader picture -- Gaby Wood * Telegraph * Bleak, but beautifully written... Clement's prose is luminous and startlingly original. The sentences are spare and stripped back, but brilliantly manage to contain complex characters and intense emotional histories in a few vividly poetic words. Her portrayal of modern Mexico is heartbreaking; a dangerous and damaging environment for women, but her portrait of Ladydi and her refusal to be one of the lost girls is defiantly bold and bravely uncompromising -- Eithne Farry * Sunday Express * Ladydi's irreverent voice sings off the page and there are laughs to be had as she relates her mother's drunken wisdom and seeks to find a way to live -- Cathy Retzenbrink * Metro * Despite its violent premise, this is a darkly comic read with one of the funniest, most touching narrators in years, highlighting a very real issue in a remarkably fresh way. An inspiring story of female resilience * Psychologies *

Jennifer Clement was born in 1960 and has lived in Mexico since 1961. She is a graduate of New York University. She is the author of the memoir Widow Basquiat and two novels: A True Story Based on Lies, longlisted for the Orange Prize and The Poison That Fascinates. She is also the author of several books of poetry, and is co-founder and director of the San Miguel Poetry Week. Jennifer Clement was awarded the National Endowment of the Arts (NEA) Fellowship for Literature 2012. She was also President of PEN Mexico from 2009 to 2012 and is a member of Mexico's prestigious Sistema Nacional de Creadores. She lives in Mexico City.