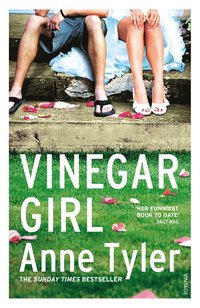 The Taming of the Shrew Retold

av Anne Tyler
Häftad Engelska, 2017-03-09
97
Köp
Spara som favorit
Skickas inom 5-8 vardagar.
Gratis frakt inom Sverige över 159 kr för privatpersoner.
Finns även som
Visa alla 2 format & utgåvor
'A thoroughly modern love story' Guardian Kate Battista is stuck. How did she end up running house and home for her eccentric scientist father and infuriating younger sister Bunny? Dr Battista has other problems. His brilliant young lab assistant, Pyotr, is about to be deported. And without Pyotr, his new scientific breakthrough will fall through... When Dr Battista cooks up an outrageous plan that will enable Pyotr to stay in the country, he's relying - as usual - on Kate to help him. Will Kate be able to resist the two men's touchingly ludicrous campaign to win her round? Anne Tyler's brilliant retelling of The Taming of the Shrew asks whether a thoroughly modern woman like Kate would ever sacrifice herself for a man. The answer is as surprising as Kate herself. **ANNE TYLER HAS SOLD OVER 1 MILLION BOOKS WORLDWIDE** 'One of my favourite authors' Liane Moriarty 'She spins gold' Elizabeth Buchan 'Anne Tyler has no peer' Anita Shreve 'A masterly author' Sebastian Faulks
Visa hela texten

It's knockabout comedy at its best, genuinely laugh-out-loud funny and, indeed, may be her funniest book to date -- John Harding * Daily Mail * The worst wedding in history ... vintage Anne Tyler -- Ann Treneman * The Times * It's every subtle shade of funny, heart-breaking and ultimately life-affirming * Grazia * Funny, thought-provoking, essential * The Sunday Telegraph (Stella) * Delightful, ingenious and convincing... Anyone who values good writing and the intelligent observation and depiction of how people feel, think and speak will enjoy it too -- Allan Massie * Scotsman *

Anne Tyler was born in Minneapolis, Minnesota, in 1941 and grew up in Raleigh, North Carolina. Her bestselling novels include Breathing Lessons, The Accidental Tourist, Dinner at the Homesick Restaurant, Ladder of Years, Back When We Were Grownups, A Patchwork Planet, The Amateur Marriage, Digging to America, A Spool of Blue Thread, Vinegar Girl, Clock Dance and Redhead by the Side of the Road. In 1989 she won the Pulitzer Prize for Breathing Lessons; in 1994 she was nominated by Roddy Doyle and Nick Hornby as 'the greatest novelist writing in English'; in 2012 she received the Sunday Times Award for Literary Excellence; and in 2015 A Spool of Blue Thread was a Sunday Times bestseller and was shortlisted for the Baileys Women's Prize for Fiction and the Man Booker Prize.