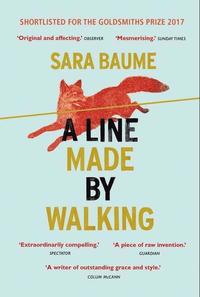 A Line Made By Walking

av Sara Baume
Häftad Engelska, 2018-03-08
119
Köp
Spara som favorit
Skickas inom 5-8 vardagar.
Gratis frakt inom Sverige över 159 kr för privatpersoner.
Finns även som
Visa alla 2 format & utgåvor
SHORTLISTED FOR THE GOLDSMITHS PRIZE 2017 'When I finished Sara Baume's new novel I immediately felt sad that I could not send it in the post to the late John Berger. He, too, would have loved it and found great joy in its honesty, its agility, its beauty, its invention. Baume is a writer of outstanding grace and style. She writes beyond the time we live in.' Colum McCann Struggling to cope with urban life - and with life in general - Frankie, a twenty-something artist, retreats to the rural bungalow on 'turbine hill' that has been vacant since her grandmother's death three years earlier. It is in this space, surrounded by nature, that she hopes to regain her footing in art and life. She spends her days pretending to read, half-listening to the radio, failing to muster the energy needed to leave the safety of her haven. Her family come and go, until they don't and she is left alone to contemplate the path that led her here, and the smell of the carpet that started it all. Finding little comfort in human interaction, Frankie turns her camera lens on the natural world and its reassuring cycle of life and death. What emerges is a profound meditation on the interconnectedness of wilderness, art and individual experience, and a powerful exploration of human frailty.
Visa hela texten

Unflinching, at times uncomfortable, and always utterly compelling, A Line Made By Walking is among the best accounts of grief, loneliness and depression that I have ever read. Every word of it rings true, the truth of hard-won knowledge wrested from the abyss. Shot through with a wild, yearning melancholy, it is nevertheless mordantly witty. It felt, to me, kindred to Olivia Laing's The Lonely City: not just on a superficial level, a young woman seeking solace in art, but in the urgent depth of its quest to understand and articulate what it means to make art, and what art might mean for the individual, lost and lonely; how it might bring us out of, or back to, ourselves. -- Lucy Caldwell Extraordinarily compelling ... What makes it so gripping as that the reader is trapped in Frankie's mind as much as she is; every tiny detail is magnified into metaphysical significance that she cannot understand and that the reader cannot parse ... Frankie's surreal and yet understandable mind-patterns are eloquent as well as awful ... On the dust-jacket Joseph O'Connor says that Baume is a 'writer touched by greatness.' I think she is bruised by it. -- Stuart Kelly * The Spectator * After a remarkable and deservedly award-winning debut, here is a novel of uniqueness, wonder, recognition, poignancy, truth-speaking, quiet power, strange beauty and luminous bedazzlement. Once again, I've been Baumed. -- Joseph O'Connor A fascinating portrait of an artist's breakdown in rural Ireland ... a remarkable ability to generate narrative pace while eschewing plot, making it enough for the reader to observe a mind observing the world ... it's fascinating, because of the cumulative power of the precise, pleasingly rhythmic sentences, and the unpredictable intelligence of the narrator's mind ... Art may also require a willingness to question the ordinary that is incompatible with conventional criteria of sanity. One of the most radical aspects of this novel is its challenge to received wisdom about mental illness ... There are no answers here, but there is a reminder of the beauty that can be found when you allow yourself to look slowly and sadly at the world. * Guardian * When I finished Sara Baume's new novel I immediately felt sad that I could not send it in the post to the late John Berger. He, too, would have loved it and found great joy in its honesty, its agility, its beauty, its invention. Baume is a writer of outstanding grace and style. She writes beyond the time we live in. -- Colum McCann

Sara Baume was born in Lancashire and grew up in County Cork, Ireland. She studied fine art and creative writing and her fiction and criticism have been published in anthologies, newspapers and journals such as the Irish Times, the Guardian, The Stinging Fly and Granta magazine. She has won the Davy Byrne's Short Story Award, the Hennessy New Irish Writing Award, the Rooney Prize for Literature, an Irish Book Award for Best Newcomer and the Kate O'Brien Award. Her debut novel, Spill Simmer Falter Wither, was shortlisted for the Costa First Novel Award and longlisted for the Guardian First Book Award, the Warwick Prize for Writing and the Desmond Elliott Prize. She has received a Literary Fellowship from the Lannan Foundation in Santa Fe, New Mexico. A Line Made by Walking is her second novel. She lives in West Cork.