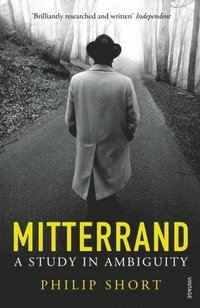 A Study in Ambiguity

av Philip Short
Häftad Engelska, 2014-11-06
181
Köp
Spara som favorit
Finns även som
Visa alla 1 format & utgåvor
Aesthete, sensualist, bookworm, politician of Machiavellian cunning: Francois Mitterrand was a man of exceptional gifts and exceptional flaws who, during his fourteen years as President, strove to drag his tradition-bound and change-averse country into the modern world. As a statesman and as a human being, he was the incarnation of the mercurial, contrarian France which Britain and America find so perennially frustrating. He embodied the ambiguities and the contradictions of a nation whose modern identity is founded on a stubborn refusal to fit into the Anglo-American scheme of things. Yet he changed France more profoundly than any of his recent predecessors, arguably including even his great rival, Charles de Gaulle. During the war he was both the leader of a resistance movement and decorated for services to the collaborationist regime in Vichy. After flirting with the far Right, he entered parliament with the backing of conservatives and the Catholic Church before becoming the undisputed leader of the Left. As President he brought the French Communists into the government the better to destroy them. And all the while he managed to find time for an extraordinarily complicated private life. This is a human as much as a political biography, and a captivating portrait of a life that mirrored Mitterrand's times.
Visa hela texten

Short gives an extremely vivid account of the way Mitterrand exercised the office of president -- Jonathan Derbyshire * Prospect * An excellent new book... The story of the rebuilding of France after the war in an equally embittered and divided republic -- Andrew Adonis * New Statesman * A compelling read for anyone interested in international power politics -- Richard Davenport-Hines * Daily Telegraph * [Mitterrand] remains an endlessly fascinating figure, and Philip Short tells the story expertly in this deeply researched and marvellously readable biography -- David A. Bell * Guardian * A stunningly detailed investigation of a monumental political character -- Robert Collins * Sunday Times * Philip Short, a former Paris correspondent for the BBC, makes excellent use of new interviews with Mitterrand's family to portray a flawed hero described by his own doctor as a mixture of "Machiavelli, Don Corleone, Casanova and the Little Prince". * Sunday Business Post * Well-rounded -- Tobias Grey * Spectator * Excellent -- Patrick Marnham * Mail on Sunday * I don't know why this extremely interesting book has not been more noticed... [A] gripping account -- Charles Moore * Daily Telegraph * A riveting read for anyone interested in political psychology -- Matthew Campbell * Sunday Times *

Philip Short is the author of acclaimed biographies of Pol Pot and Mao Zedong. He worked for ten years as the BBC's Paris correspondent and lives in France.