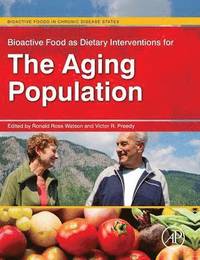 Bioactive Food as Dietary Interventions for the Aging Population

av Ronald Ross Watson
Inbunden Engelska, 2012-10-20
779
Köp
Spara som favorit
Skickas inom 10-15 vardagar.
Fri frakt inom Sverige för privatpersoner.
Finns även som
Visa alla 1 format & utgåvor
Bioactive Food as Dietary Interventions for the Aging Populationpresents scientific evidence of the impact bioactive foods can have in the prevention and mediation of age related diseases. Written by experts from around the world, this volume provides important information that will not only assist in treatment therapies, but inspire research and new work related to this area.

Ronald Ross Watson, PhD, is Professor of Health Promotion Sciences at the University of Arizona, Mel and Enid Zuckerman College of Public Health. Dr. Watson began his research in public health at the Harvard School of Public Health as a Fellow in 1971 doing field work on vaccines in Saudi Arabia. He has done clinical studies in Colombia, Iran, Egypt, Saudi Arabia and the United States which provides a broad international view of public health. He has served in the military reserve hospital for 17 years with extensive training in medical responses to disasters as the chief biochemistry officer of a general hospital, retiring as a Lt. Colonel. He is a distinguished member of several national and international nutrition, immunology, and cancer societies. Dr. Watson's career has involved studying many lifestyle aspects for their uses in health promotion. He has edited over 100 biomedical reference books and 450 papers and chapters. His teaching and research focuses on alcohol, tobacco, and drugs of abuse in heart function and disease in mouse models. Victor R. Preedy BSc, PhD, DSc, FRSB, FRSPH, FRCPath, FRSC is a staff member of the Faculty of Life Sciences and Medicine within King's College London. He is also a member of the Division of Diabetes and Nutritional Sciences (research) and the Department of Nutrition and Dietetics (teaching). Professor Preedy is also Director of the Genomics Centre of King's College London.

Professor Preedy graduated in 1974 with an Honours Degree in Biology and Physiology with Pharmacology. He gained his University of London PhD in 1981. In 1992, he received his Membership of the Royal College of Pathologists and in 1993 he gained his second doctorate (DSc), for his outstanding contribution to protein metabolism in health and disease. Professor Preedy was elected as a Fellow to the Institute of Biology in 1995 and to the Royal College of Pathologists in 2000. Since then he has been elected as a Fellow to the Royal Society for the Promotion of Health (2004) and The Royal Institute of Public Health (2004). In 2009, Professor Preedy became a Fellow of the Royal Society for Public Health and in 2012 a Fellow of the Royal Society of Chemistry. Professor Preedy has carried out research when attached to Imperial College London, The School of Pharmacy (now part of University College London) and the MRC Centre at Northwick Park Hospital. He has collaborated with research groups in Finland, Japan, Australia, USA and Germany. Prof Preedy is a leading expert on the science of health and has a long standing interest in neurological disease and tissue pathology. He has lectured nationally and internationally. To his credit, Professor Preedy has published over 600 articles, which includes peer-reviewed manuscripts based on original research, abstracts and symposium presentations, reviews and numerous books and volumes.